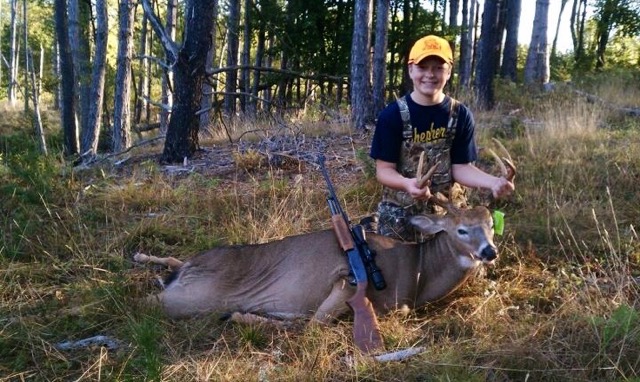 Fall in Michigan can mean many things: colder weather, changing of colors, Halloween festivities and hunting.

It is estimated by the Michigan Department of Natural Resources that 554,331 hunters participated in hunting season during 2018. The report also showed 361,000 deer were harvested during the 2018 season.

Michigan has different seasons for hunting. Archery season begins the main leg of the hunting seasons and it runs from Oct. 1-Nov. 14. Following archery is firearm season, which runs from Nov. 15-Nov. 30. From Dec.23-Jan. 1, Michigan opens a late antler less season, meaning only deer without antlers can be harvested.

Galgoci has property in Weidman near Lake Isabella where he and his family hunt. He said they have a friendly competition every year on who can get the biggest buck.

“Getting a big buck is the best feeling in the world,” Galgoci said.

Galgoci said his last three deer have all been bucks including his largest buck which was an 8-point.

He and his roommate, Mark Rich, a junior from Dayton, Ohio, both have been hunting this archery season.

“I love just being in the woods,” Rich said. “Not getting a deer doesn’t bother me too much because the woods are so peaceful.”

Both Rich and Galgoci prefer archery season over firearm season because of how close the animals have to get in order to get a shot.

“Bow hunting requires more skill and patience,” Galgoci said. “The deer just have to get closer for you to be able to do anything.”

The roommates use hunting as an escape from reality.

“Being in the woods allows me to just think and reflect on life,” Galgoci said.