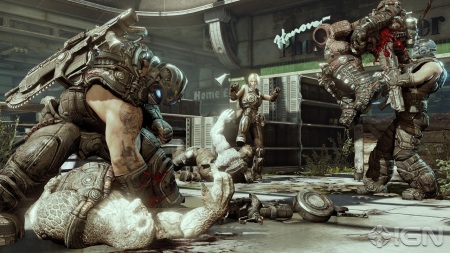 In “Gears of War 3,” humanity is pretty screwed. Mankind is on the verge of extinction from fighting the Locust horde, and with the introduction of a new enemy, the Lambent, hope is just as rare as true safety. Put simply, things are bleak.

There are two major problems with the campaign: For one, the characters are unbelievable. When you’re not fighting, the main characters are fleshed out decently. They almost seem to have real emotions! The problem is that when you start fighting, they drop any sense of depth that they’ve established.

Nice ol’ Dom forgets all about his dead wife and tending his garden when he picks up a gun. Once he drops his garden tools and picks up a rifle he also drops any kindness he may have had in favor of aggressiveness and hyper-masculinity. Screaming “F—ing s–t!” while fighting makes one forget about any depth he may have.

The second problem with the campaign is that it’s hard to get really excited about what is happening. Gears 3 opens with the player fighting a kraken-esque creature and doesn’t let up. The game is stuffed full with moments that by themselves would be highlights of any game, but when they’re placed back to back, nothing seems more memorable than anything else. The action is set at a high level and never seems to let up. Epic moments seem to blend together making it hard to get excited.

Good news! Those are the biggest complaints I have with Gears 3. The game is solid in all other aspects, but if I were to point to one element as the best part, it would definitely be the multiplayer experience.

More than any other franchise, I equate “Gears of War” with multiplayer. Usually I stick to playing by myself or not communicating with the other people I’m playing with, but Gears has always been a game to play with friends. Gears 3 offers more ways to play with friends than the previous installments.

Gears 3 bumps up how many people you can play through the campaign with. Now you can murder aliens with three friends instead of just one. The competitive multiplayer is still fun, and horde mode is back, minus the bugs and glitches from Gears 2. The multiplayer doesn’t end there though.

Developer Epic has thrown in a new form of play called “Beast Mode.” Now you can play as the Locust and kill humans. You’ll start as lower class grunts and slowly earn your way to more powerful creatures to play as. The mode is fun, but I have a hard time picturing anybody playing it more than the others.

It’s hard to call Gears 3 a major improvement over its predecessor. Sure, a few glitches and bugs were fixed, a new mode is thrown in and it’s as prettier than ever, but the game just feels like more of the same. That’s not bad. The Gears series has always been a staple in the Xbox owner’s library. While character design and pacing issues plague the game, Gears 3 is still very fun. That’s all that really matters.