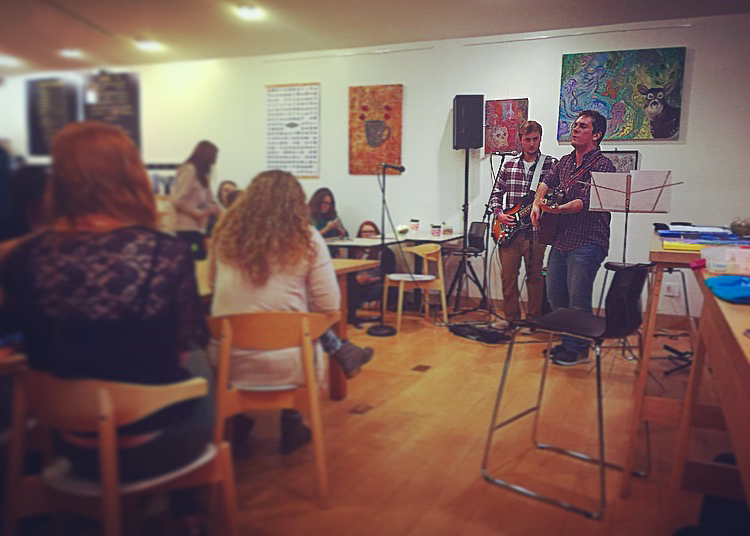 Story and Photo by Samantha Shriber
Ian Armstrong moved to Mount Pleasant earlier this fall to begin pursuing his doctorate degree in Industrial Organization Psychology at Central Michigan University. Not only did he carry with him the desire to learn, but an enormous passion for performing, and a rather unique resume.

He’s been playing in bands for the past six years and is now taking on the Mount Pleasant music scene with his solo acoustic act, Walk Her Arms.

“It was so easy for me as a musician who had just moved here two months ago to invade the market as a performer. It’s a very under-saturated market for musicians and there’s many inexperienced ones here at the moment, or are at least out there trying to make a name for themselves and to perform,” Armstrong said. “It’s a lot more of an open environment where venues are looking for performers to play, in which from where I’m from is never an issue, it’s very oversaturated.”

From Georgia to Mount Pleasant
Quite oversaturated, indeed. Athens, Georgia is often noted for playing a key role in the early upbringing of alternative music. Often contributing to what has become known as the new wave of music, Athens is a renowned starting grounds for sound, especially for Armstrong.

To embed himself with the new scene, Armstrong has gone from performing at the Georgia Theater and the 40 Watt Club to smaller restaurant venues.

“It’s funny because before I moved to Mount Pleasant, I only played big venues. I never played at a coffee shop before, so this has actually been a big transition for me in terms of style of performance that I do because I wasn’t a solo performer before I moved here.”

Since his dramatic change in setting, Armstrong has frequently plays sets at the Cabin, Rubble’s Bar, Kaya Coffee House and the Dreamer Coffee Shop.  He says he loves performing at the Kaya Coffee House because he appreciates the supportive staff and community, while also preferring the Dreamer due to the settings’ acoustics.

However, Armstrong believes that it’s the audience that makes a venue truly spectacular.

“It’s really not so much about the places is it is about the people. Everywhere that I’ve gone, I made friends at the establishments I’ve played at. There’s not really a particular place I love going to the most.”

But with this being said, Armstrong hopes to see the community of local performers become better established in the near future.

“There’s not a ton of advertisement for local music in Mount Pleasant specifically since there’s not much of a scene for it. I have been trying to collect contact information for local artists and let them know about performances where there are needs for artists to perform.”

Despite the obstacles of being a new fish in a moderately-sized pond, Armstrong’s past gives him an experienced, almost-expert perspective of the music community.

Armstrong’s Development of Sound
His first band was a metal band that he joined at the age of 16 as a bass guitarist and background screamer. He describes his experiences with the group as a “sink or swim” situation that demanded a stage presence that was dramatic, theatrical and outrageous.  These situations have helped with gathering a refreshing, sort of spectacular aesthetic to his stage presence.

“I do jazz covers of pop and alternative songs to give a little bit of a twist on things,” said Armstrong. “Blues, soul – I’ll play some Bill Withers and Marvin Gaye and things like that. It’s really all over the place in terms of genre wise of what I play.”

Armstrong also describes his vocal tambour as being very similar to that of Brendon Urie, the lead singer of Panic! at the Disco, another huge influence to his performance style.

“A lot of my songs are about my relationships with women. It’s a lot more on the vein of pain, heartache and what makes people happy and what makes people sad in terms of their own experience with life,” said Armstrong. “It’s not necessarily about how society affects you, but your interpretation of negative and positive things. It’s a very interpersonal thing I’m going for right now.”

Armstrong plans on recording over 12 original songs in Atlanta, Georgia over one of the upcoming academic breaks. He can also be found on Facebook, and he also performs at the Kaya Coffee House every Wednesday during their open mic segments. Some of his music with his former band Sababa is available on Soundcloud.

“In general, I think people should go out and listen to local music as frequently as they can,” says Armstrong. “You never really know what you’re going to hear when you listen to an artist for the first time and it’s always a pleasant surprise.”