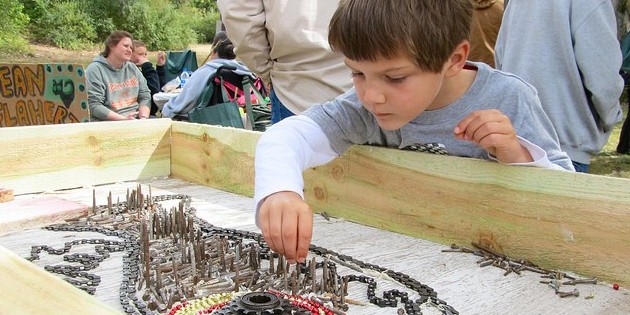 In a clearing separated from the surrounding trees, children painted bats and constructed imaginative crafts from yarn, fabrics and other synthetic materials. Flurries of ash from a bonfire meandered through the chilled autumn air. Pans of hot chili simmered and an acoustic guitar was faintly strummed to a familiar tune.

This weekend marked the fifth installation of the annual Art in Our Parks event. On Sept. 22, residents toured an area displaying local artists, live music and arts and crafts for kids in the south end of Deerfield Park.

Sue Ann Kopmeyer, director of Isabella County parks, stood at the first tent greeting a steady flow of visitors in arrival. Ensuring that each person checked in, she informed them of the daily activities, offering miniature envelopes of wildflower seeds, bumper stickers and bowls of chili.

“I just love the idea that we’re bringing different crafts and entertainment together,” she said.

As guests circled through the tents and engaged in various activities, a late September sun fought with dark clouds above, and rain started to sprinkle around 1:45 p.m. Most of the activities had been shielded by the awnings of the tents with rain subsiding minutes later. Though last year’s Art in Our Parks boasted 200 attendants, the weather became a concern for this year’s turnout.

But that did not halt local artist Sean Flaherty.

Positioned between kids playing at a water pump and local musicians under a pavilion nearby, Flaherty worked diligently without a tent overhead. His piece, entitled “Recycle,” incorporated the use of discarded bicycle chains and sprockets, old screws and items that had been thrown in the river, including beer cans, a license plate and a pair of pink sandals.

“I kind of just ran around and I wasn’t too picky with what I got,” he said, as he rustled through his materials. “Just get a bunch of stuff and make it work I guess.”

Flaherty’s frugality was certainly reflected in his work. Aside from the Liquid Nails adhesive used to piece everything together, all materials were either recycled or reused.

“You can go to Wal-Mart or Michaels and buy $30 worth of paint and a $30 canvas and it’s all chemicals and made in China, or you could just go dig through your trash and piece something together,” he said.

Flaherty, an Indiana native and employee at Buckley’s Mountainside Canoes, has been involved with art since he was a kid. He enjoys painting portraits and murals, but admits having never undertaken the style of his current project.

“I always like to try something different,” he said. “I’ve done some things like this but nothing quite so bold.”

Following the arts and live music was a nature hike on the park’s Oak Ridge Interpretive Path, stretching just under a half mile. Children and parents were escorted through the woods, stopping at designated locations to view renditions performed by belly dancers and poetry readings from students attending Central Michigan University.

Residents Lisa Koontz-agoff and Deana Ostroske came to the event simply to view nature, relax and watch their kids having fun outdoors. They hiked in with a group of Boy Scouts and camped overnight.

“(The kids) are all finding their own niche,” Ostroske said. “They’re finding something to do and being creative. It’s good for them.”

The event inherited a laid-back feel with guests, artists and musicians strolling the grounds at a leisurely pace before exiting. Kopmeyer, who has attended for the past five years, says the setting of the event is unique to having a day in the park.

“People can just stay here for the afternoon — you don’t have to rush in and catch a performance and leave,” she said. “It’s really my favorite event.”