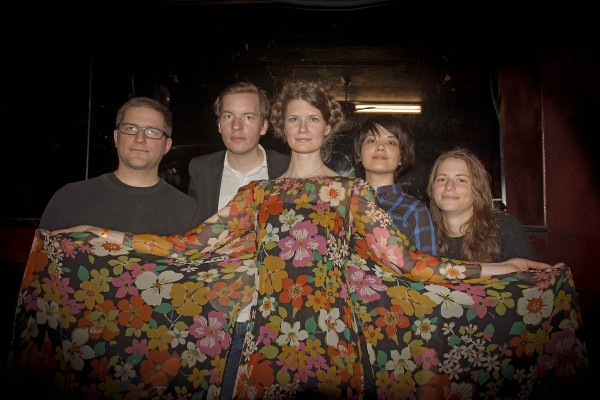 After 13 years, dozens of band member changes, an evolving sound and several moves, one thing has remained the same for the Michigan band Saturday Looks Good To Me‘s Fred Thomas. He’s been with the band through the thick of it, and I had the chance to pick his brain.

GC: So how did Saturday Looks Good To Me start? Where did this all begin?

FT: So many years ago. I was in a punk band, and when I wasn’t screaming I was making really soft, sweet kind of Motown-style music. I really liked the politics part, but I didn’t like the music very much. I had my friends come over and sing these songs that I wrote, and after a little bit I had like, 10 or 11 songs, and I just put out a record of it and called it “Saturday Looks Good To Me.” But that was kind of how it began.

GC: Where did the name come from?

FT: My friend Dan put on punk shows and one time he got a flier and was talking to someone and said, ‘What gig are you going to go to?’ Dan said, ‘Well, saturday looks good to me,’ and he’s like, ‘That’d be a pretty good band name.’

GC: You broke up in 2008—what brought you back? Why is this holding your interest for so long?

FT: It’s really strange. In 2008, I was moving around a lot. I lived in Portland, then I lived in New York, then I moved back to Michigan, and I didn’t really have the energy to get a band together all the time. So I was playing by myself all of the time and just whatever, but I always kept on writing songs in that same style, you know? I kept a very specific type of song I wanted to write in SLGTM. One day, my friend said ‘Why don’t you put out another record man? Stop being such a loser about it, you know?’ And I was like, okay, if you say so. So it was kinda random—it wasn’t like ‘Kay, we gotta get this band back together and make it really big.’ It was like ‘Oh yeah, we got more songs. You know there’s gotta be like, 20-30 people in the world who are really excited about it. So f–k it, let’s do it.’

GC: Do you think that any of your projects you did when the band was on hiatus have leaked their way into the new album, “One Kiss Ends It All?”

FT: You know, people have said that [about] the band called City Center that kind of goes super trippy and weird and not really electronic, but a little more strange. And there’s some weird tape effect stuff and lots of delay on the vocal [going on] in the band, still called Swimsuit, that I play guitar in. It’s kind of surf-y, and it’s been three or four members that played on “One Kiss Ends It All.” So, I think that probably got in there too.

FT: Well that’s another great question, and I have an answer that most bands are working toward something at this point. SLGTM has been a band for 13 years and has also been kind of a vaguely familiar existing band for 13 years, and we’re really not working toward anything at the moment. We’re doing something we’re really proud of, but we can’t tour because we can’t get the schedule together at all because of med school and a full time job, and that’s okay, because I used to be on tour for eight months or a year, and that’s not really a natural way to live sometimes. I feel like the process of making records ends up being really, really strange, but it was not quite a thing like ‘We’re gonna take over the world … this one’s gonna be the one.’ That stuff is kind of silly to me. I don’t even have a Facebook because I just can’t stand thinking about what other people think about me all the time. I feel like I’m following that same logic for the band. If people like it, that’s so amazing.

GC: Your band has gone through a lot of different member changes, and it seems like you’ve welcomed this. Where do you feel your band is at right now, and how is that vibe different from the past?

FT: It’s insane, you know … for the longest time … we don’t have a drummer right now. We have a sampler for drums, and it’s really, really amazing because we’ve had a drummer in the band almost all the time — except times when the drummer wouldn’t show up and we’d play without him — but let me start over. There’s a couple times in the past where we’d have shows where the drummer wouldn’t show up because he got drunk or forgot about the gig or whatever, and we’d play without him and the shows turn out so nice. You hear more of the subtle parts. We had a drummer up until very recently, and I played the drums at one show and that didn’t go over well. When we went back to the no drums-stage, we started using a sampler and it sounded really cool. We have a cello player, a violin player, electronic drums, keyboard … it’s definitely a different vibe, but its really, really strange. It sounds kind of bare and open, and I’m not sure what people will think of it. I love it.

GC: What was unique about Carol Catherine’s vocals on the new album?

FT: Well, she is such a star. She is someone I’ve known for a long time, and she would always be singing backup with bands, but I never saw her sing as a soloist, ever. When she was playing with a different band, I was like, ‘Man, what a great singer.’ Then she sang by herself, and she sang so much differently than I thought she would because I had never heard her in that context. I was kind of like, “Wow, you’ve got such a big voice, you make up the most amazing harmonies with yourself,’ and there’s a lot of songs on the record where she’s singing five or six tracks of harmonies alone, and it sounds so beautiful. But I think that the most incredible thing about it is her voice; it’s just so unique. You know how you hear ‘Oh, that just kind of sounds like everybody sounds, like Cat Power or Feist’ and there’s five voices that people have you know. She doesn’t have any of those voices, and I really appreciate that.

GC: You moved around from Michigan to New York to Portland and back, what brought you back?

FT: I was born here, grew up here, I have so many friends here, and there’s no place like Michigan at all. All the good and bad qualities. It’s hard to get by here sometimes; there’s not a lot of money. There’s lot of people who are from Michigan and have a chip on their shoulder. But there’s also the big-hearted people, and some of the strangest people I’ve ever met are from Michigan. There’s such a wealth of characters and the experiences you can have. You can spend your entire life in any given place in Michigan and have a really colorful biography. It’s true of a lot of places. I love Portland — it’s great and I’d go back there and eat food any day. New York is an amazing place with ample characters, sure, but I think it’s when you grow up somewhere that you kind of understand it more. It’ll always be home base. There’s never going to be a time where I feel like I don’t belong here if I’m not doing great. If I’m thinking about some other place, I probably still feel, in my heart, comfortable here. I think that’s what a hometown is, right?

GC: Talk to me about your connection to Detroit. Where do you feel SLGTM fits in with Detroit music?

FT: I did live in Detroit for a little while, and, I’ll be honest, when SLGTM started, we started kind of in the same time as the “garage rock” blowup scene, and it was so much easier if we’re playing a show in London to be like ‘We’re from Detroit’ — which is not true, but to say we’re from Ypsilanti … I struggled with it really deeply for a while. I felt like such a poser and when there was an interview in a magazine, it would be ‘So, tell me about Detroit. What’s a day like in Detroit?’ Well, for me it starts about 40 miles away, and there’s a really nice coffee shop over there really close to college, so…I lived in Detroit for a year, I played in some bands in Detroit and I’m still in Detroit all the time. I have a lot of friends there, but I try to stay away from claiming ownership of any place because I’ve realized people get really, really hung-up on that and it’s a little boring. If I’m being honest, I probably sold some records in 2002 or 2003 by [saying] ‘Oh yeah, we’re from Detroit.’ Somebody probably heard the word Detroit and was like ‘Well, I love the Von Bondies; they probably sound just like them [because] they’re from the same town.

GC: Where do you think Detroit music is going?

FT: That’s an amazing question because it’s so different now. I’ve been going to shows in Detroit since I was a teenager, and so many scenes kind of come out of it — like garage rock or techno or any. There’s a huge spiritual jazz thing that came out of Detroit in the ’70s and ’80s and things that were foundational. I feel like, right now when I go to shows in Detroit, there’s this relentless scene. No one’s really making any money, so no one’s really hung up on what they have to sound like to appease critics, audience or anything — they’re just jamming. They’re just trying to get their ideas out, and it’s kind of weird venues. I did this show a couple weeks ago at a super creepy loft space, and it had a real filthy vibe. I did this dance set and, when my friends came, I said ‘What’s going on, glad you came!” and they were just like ‘Oh, we just came by to buy some drugs.’ So, that’s kind of what’s happening on some level — and something is happening all the time — and people are trying to do things for the better. I think new movements are going to come out of it in the next five years.

GC: Do you think that’s the same with Michigan bands in general?

FT: That’s such a tough one because I really have a lot of friends that identify with the Michigan folk vibe and I don’t. I don’t like to identify with anything. Really good bands get so hung-up on, like, ‘Okay, we have to get a mandolin player on this song or it’s not gonna be folk-y enough, you know? There’s not a lot of bands that sound like each other when it comes to Motown or pop bands. That’s not really happening. I try to swing along with everybody and play all their records, and, so far, it’s worked. There’s been so many different bands, and I try to help out. That’s pretty much all I do.