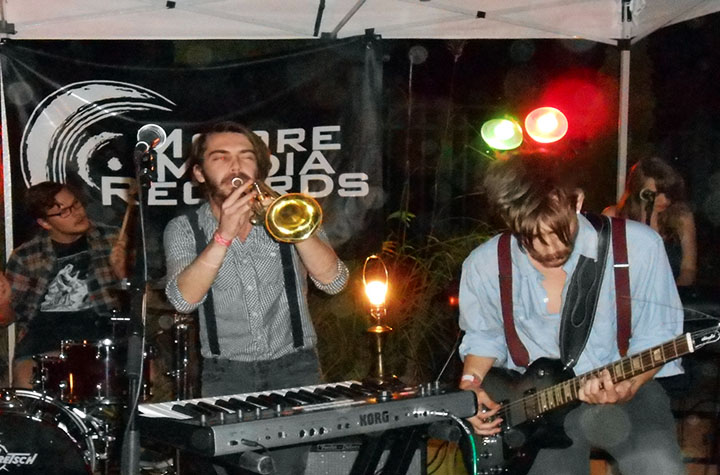 Midwest Fest, held this past weekend at Hunter’s Ale House, is an annual concert festival that brings in bands from all over Michigan for three nights of local music. The highlights this year ran aplenty, and there was an infectiously positive vibe running through the weekend. Grand Central writer Chelsea Hohn and Arts and Entertainment editor Sam Tunningley discuss the best aspects of the festival below.

The Venue: The venue change for this year’s Midwest Fest was a smooth transition from all angles.

“As far as I can tell, everyone loved having it at Hunter’s Ale House,” Corey Densmore, the event organizer, said. “Having two stages kept things flowing very nicely and several people commented on both the food and drink selection of Hunter’s being superior, as well as the layout of the venue being more accommodating. Several bands especially expressed their gratitude for the venue change.”

Sam: Hunter’s Ale House was a spacious, welcoming place to hold the festival this year. The big plus—and this runs contrary to most music festivals—is that the bands never overlapped. This made it easy to see every single band playing on each night. The music was essentially non-stop; you could go outside and watch a band and then come in and watch another. Hunter’s also had a fine selection of beer on tap, including specials on drinks from the Mt. Pleasant Brewing Company.

The Music: The music of Midwest Fest was eclectic and strong this year. The three nights were host to some older favorites (Stepdad, The Crane Wives) and some young, raw talent (Flint Eastwood).

“Personally, two artists who were new to Midwest Fest really stood out as possibly the best performances of the weekend,” Densmore said. “MISTER (of Passalacqua) wowed the audience with a very energetic and impassioned performance. Carielle stunned everyone on Saturday though with one of the better performances I’ve seen in a long time. They’re such a great band. I’ll be having them back soon for another show at the Ale House.”

Chelsea: Thursday was all about The Soil & The Sun for me. I had been gearing up to see them all week, listening to them every day. I just discovered them this year and was absolutely blown away by their undiscovered talent. Seeing them play the songs I had been obsessing over for the past months was satisfying and gave me chills. I bought the CD without thinking twice.

Flint Eastwood was arguably a better show than Stepdad. The vocals by Jax Anderson were unbelievable. The wild energy she brought to Hunter’s made the odd decor and generally strange atmosphere in the place totally fade away. Twice, Anderson ordered the crowd to squat down on the floor, and a few rebels eventually succumbed to the pressure and got down low. Their recorded music is intriguing, interesting and intense. Their live music is all of that times 10, and lacking a bit of the pop sound, which I was glad for.

The Crowd: The Midwest Fest audience was a mixture of young and old music lovers alike. Hunter’s Ale House supplied enough room to hold the large amount of attendees.

“The turnout this year was right about what I expected to see,” Densmore said. “Friday night was maybe a little lighter than expected, but it was still a great night. The average attendance over the three nights, and the kickoff was the highest average we’ve had for Midwest Fests held in Mount Pleasant.”

Sam: The most rambunctious night had to be Friday, when the festival had its peak number of concert-goers. It was a surprisingly warm atmosphere, and everybody seemed friendly and ready to dance. The energy from Flint Eastwood, especially—my favorite band of the festival by a distance—was felt through the entire crowd, and it all turned into an exciting and frenetic dance party. The belligerent, drunken shouting at the acts was, thankfully, kept to a minimum.