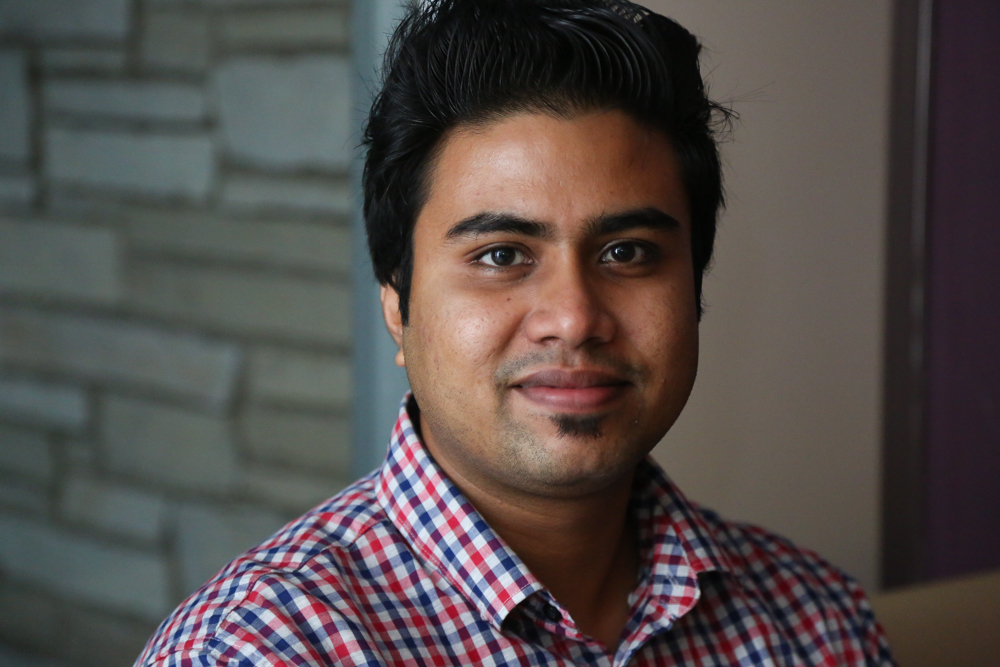 Yichen Hu’s favorite memory at Central Michigan University is going to a football game for the first time. The junior Broadcast and Cinematic Arts major left China one year ago to study at CMU and she attended her first football game last weekend with four of her friends.

“It made me feel like I am in an American school, an American campus, so I felt so excited about that,” Hu said.

Though she said meeting American friends is easier now than when she first came here, she still said listening to and speaking in English is the most difficult part of attending CMU as an international student.

Moving Away from Home
When Hu came to CMU, she thinks her parents were already used to her being away from home because her university in China is far from her hometown, which she described as a “beautiful place” with mountains and rivers.

At her university, she had one option if she wanted to study in the United States, so she ended up at CMU.

She was surprised by the lifestyle and communication when she arrived in the U.S. because she said it’s quite different from China. When she first arrived, she said, she thought about how to answer when people said, “hello, how are you today?” She would give a response like, “I’m kind of tired, I’m not so good.”

Later, she said she started to notice that people just answer “good” most of the time.

She was also surprised by the differences in academics.

“In China, our parents and our teachers will tell us, ‘you need to study more. Study hard,’” she said. “But here, our parents are in China so we’re far. They don’t have so much time to tell us. And the American teachers, they don’t tell us we need to study hard, so we have to study by ourselves and it’s different.”

Hu also said many Chinese students miss Chinese food while they are at CMU.

“I like hamburgers and pizza and coke, so maybe for me, it’s good to eat American food,” she said. “But I know other Chinese students said to me that they don’t like eating American foods. If we live off campus, we can make food ourselves. But if today I’m tired or today I want to get more delicious food, then we don’t have so many choices for Chinese restaurants in Mount Pleasant, so it’s a little hard for us.”

Mominul Hoque, a graduate student from Bangladesh, wasn’t used to living on his own when he came to Mount Pleasant because in his country, he said, people usually stay with their families.

He was also surprised by how friendly people were here.

“When I was here for the first time, when beautiful ladies used to smile at me, I got confused, ‘why are they smiling at me?’ But yeah, they are very friendly – all of the students here,” he said.

In his country, he said, boys and girls are separated in school and don’t hang out much.

Getting Involved on Campus
Hoque is the vice president of the International Student Organization at CMU. He also spends a lot of time volunteering. He went on an Alternative Spring Break trip last year, and said he also went to Flint at least 10 times.

He studies fashion merchandising and is a teaching assistant within the department.

“In my second semester, once I was in the final class, the last class for the semester, all of the students, they came to me and they wanted to take a selfie with me. They said, ‘we are going to miss you’ and ‘probably you are one of the best instructors we’ve had’ so that was one of my favorite memories,” he said.

Venkata Buddharaju, a graduate student from India, enjoys volunteering, participates in ISO events and is the president of the Indian Students Association.

As president of ISA, he said his main job is to help other Indian students adjust to life on campus. The group also posts volunteer opportunities and events on social media and hosts an event each semester: Diwali Night in the fall and India Night in the spring.

Hu is the president of the Chinese Students and Scholars Association, which focuses on helping other Chinese students at Central. CSSA members will drive to Lansing to pick up new Chinese students from the airport at the beginning of the semester. The organization also hosts several events, including a Halloween party, the Chinese New Year Gala and a Mid-Autumn Festival event. The goal of these events is to bring Chinese students together for they can make new friends and help each other, she said.

Interacting with Americans
Hu said many Americans attend the New Year Gala, but not many attend the organization’s other events.

However, she thinks Central is a good place for international students to improve their English because they are surrounded by native speakers.

She said she thinks most American students at CMU are nice and patient when interacting with international students.

“In my class, there is only one [international student] – me,” she said. “So I have to communicate with native students.”

“As well as promoting our own cultures from each country, we are celebrating the American culture, like Halloween and Thanksgiving so that the American culture comes to know what ISO is all about and they can remove that misconception that ISO is only for international students,” he said.

He said you will hardly ever see an international student studying with an American student. Whenever he goes to the Student Activity Center or the library, he feels as though most American students aren’t interested in talking to him.

“My roommate, he just came this semester from Bangladesh and he was complaining to me, ‘I thought Americans were more friendly but whenever I talk to them, I feel like they are not interested to talk to me’ and I didn’t want to demotivate him,” he said. “I told him probably you should approach them in a nicer way. But that is the fact, so we definitely need to work on that.”

He said he’d like to see CMU organize more events that encourage international students and American students to come together and exchange their cultures. He thinks the language barrier and cultural differences might be what makes forming friendships with Americans challenging for international students. He also thinks people should open up more to make new friends.

“My best American friend, when I talk to her, I don’t see differences,” he said. “We study together, we hang out together, we celebrate each other’s birthdays and we are from the same department, so whenever we have free time, we hang out.”

Buddharaju thinks having common interests makes talking to Americans easier, so he listens to NPR and watches American shows to learn more about the culture.

“We’re really scared at the beginning to talk to [American students] because English isn’t our primary language and it is kind of difficult to talk to them on a regular basis,” he said.

Overall, though, he thinks it’s easy to make friends because people are welcoming. Sometimes when he goes to the SAC, he’ll play volleyball with American friends.

He also said many Americans attend ISA’s Diwali Night and India Night events. Last year, the group promoted the event by interviewing random people on campus about what they know about India and creating a video.

“The first question was ‘what is the first thing that comes to mind when you hear about India?’ and most people said, ‘food, dance, culture, colors, Gandhi.’ Some said ‘Slumdog Millionaire’. We had various answers,” he said. “They said they had some Indian food, but not authentic food, so we invited them to come to our event where they could have Indian food and learn about the culture.”

Experiencing CMU
Buddharaju said he loves the culture, the people and how there seems to always be something happening on campus.

Hoque loves the students, the faculty and the school spirit at CMU.