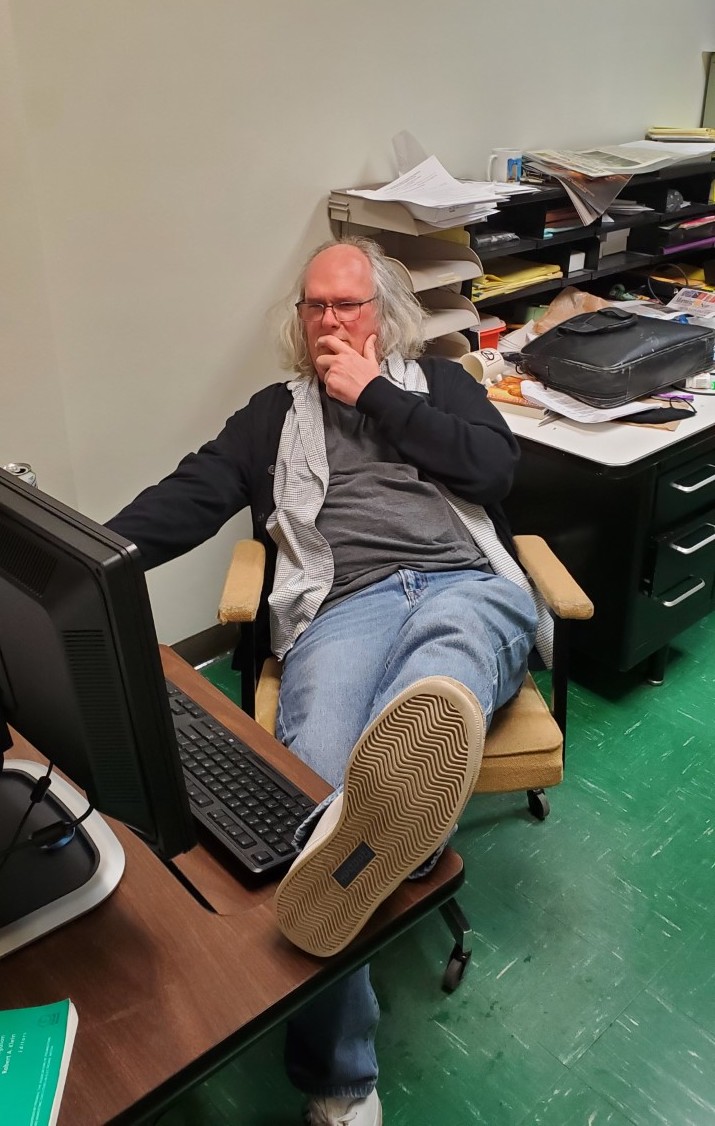 Story and photo by Micheal Piwowarski

For nearly 20 years and counting, one CMU professor has been hard at work making learning fun and introducing a unique form of writing to his students: copywriting.

Will Anderson, a professor in the Broadcast and Cinematic Arts program, teaches students how to effectively write for TV and radio advertising in his BCA 311 copywriting course.

“It’s the most beautiful form of writing in so many ways because it’s a 30-second ad,” Anderson said. “You can’t go on and on and on. Basically, if it goes on for three pages, it’s like, ‘Friend, you didn’t time this. It’s way too long!’”

The number one takeaway from copywriting is it’s more concise than traditional academic writing. Different techniques are used in order to write in a way that is concise and grabs the audience’s attention.

“For radio, dialogue works really good,” Anderson said. “For TV, dialogue ads do not work. That’s where you get those horrible cheesy ads. Use the power of TV to show things!”

Having a background as a copywriter, and a TV listings coordinator for Wisconsin Public Television, Anderson previously taught at Northern Illinois University while working on his doctorate.

Anderson was first introduced to CMU when a friend showed him a flyer from the CMU College of Communication and Fine Arts (now the College of Arts and Media), advertising a competition for audio dramas – Anderson’s other passion.

According to his faculty profile, Anderson has authored several radio drama scripts, including the Ask Answergirl Series and The Holiday Spirit Seasonal.

Having submitted an audio drama story to the competition, Anderson won first place. This led to him getting hired into the BCA department when an opening came up, and he started in 2002. At this time, the school’s Public Relations program was expanding and needed to hire more faculty. Since then, Anderson has taught electronic media promotion and copywriting.

“It’s so great that that’s what I get to do,” Anderson said. “It’s a perfect fit for my interest, so I really enjoy that. I spend my summers writing.”

Anderson brings heart and passion into the classes he teaches and strives to make an engaging learning environment for his students. He said he sat through “so many bad classes” during his college experience, which inspired him to think of how to make his own classes better.

“I realize a lot of people are so tired when they come in, and they’ve been in school for so long, and for some people, school is not a rewarding experience,” Anderson said. “I try and craft it and create it in such a way that it helps kind of make it a positive sort of experience when you hopefully learn a lot.”

With a 4.7 out of 5 rating on RateMyProfessors.com, Anderson has gotten rave reviews from students. The most recent student review – dated April 24, 2020 – says “Will is the most caring professor I have had at CMU.” Another review says, “he made a boring subject interesting and treats the class with a lot of respect.”

“I had some really meaningful experiences with students in general,” Anderson said. “I think they appreciate the courses, and they occasionally drop me a note or say something on Facebook – ‘I really enjoyed that class’ – and I was like, that kind of adds up because I really enjoy teaching.”

Anderson said the switch to online-only learning in March 2020 was like “running a 7-11”, with students sending him emails up until as late as 3 in the morning. Yet, he has remained committed to his students, even though many of their faces are on a WebEx screen during the HyFlex learning mode.

“I’m far more parent than I am professor,” Anderson said. “If somebody goes missing, I’ll say, ‘Hey, is everything okay?’”

For aspiring copywriters, Anderson has some key points of advice, the main one being to keep sentences short and to use active voice.

“Don’t use ‘be’ verbs if you can avoid it,” Anderson said. “Try and get out of the mindset of writing academically. Try and figure out: who’s the one person that you know better than anyone else – how can you sell them something?”