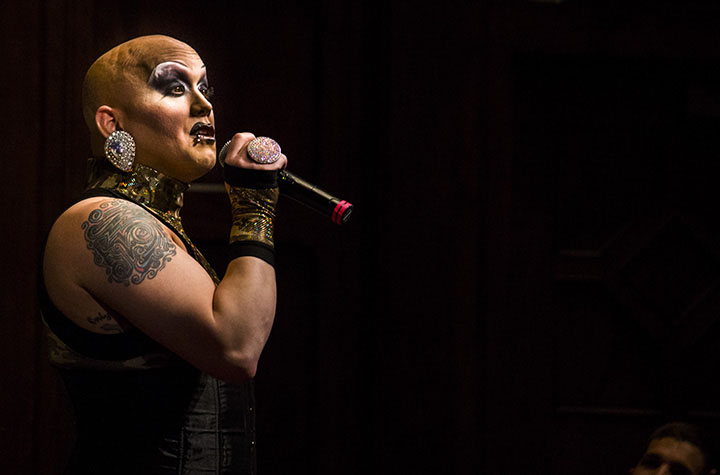 No one was safe and without a good laugh at last week’s Pride Week drag show.

Detroit based performer Sabin was open and comfortable with the audience from the beginning in the not safe for work show at Plachta.  Joined by fellow performers like Eva Angelica and Donnatella, the show lasted a over two and a half hours to an energetic crowd.

“This is my favorite show of the year,” Sabin said.

Between performances from Sabin’s fellow performers, she walked between the aisles of Plachta Auditorium’s full house, answering questions, telling personal stories and telling jokes.  But Sabin told the audience that the evening was going to be anything but appropriate.

“So if you are a Christian or easily offended, welcome,” Sabin said.

Grad students, alumnas, undergrads, faculty, and more turned out for the show.   Some were faithful attendees of the annual event while others were newcomers who did not know what to expect.

Freshman Hannah Bartol said she didn’t leave with a frown.

“It was a fabulous show,” Bartol said.  “It was a great way to bring everyone, no matter their sexual orientation, together for a good time.”

Students eagerly participated in the show’s events.  During a striptease from a Central Michigan student, many flocked to the stage to offer up money during the performance.  Others took the stage for a more clothed performance.

“I really enjoyed that a few CMU students got involved on stage,” senior Emily Podgorniak said.  “The support they received for doing so was great.”

The Drag Show was organized by the director of LGBTQ services Shannon Joliff, who was in attendance with her wife, and the service fraternity Alpha Phi Omega.