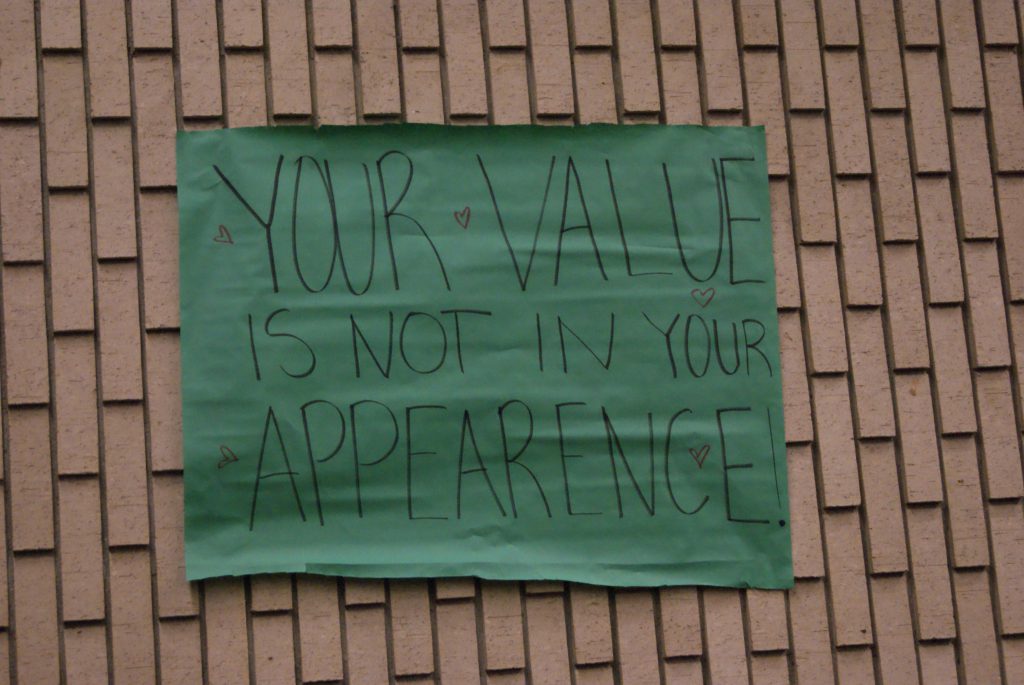 Story and video by Rachel Bednarz and Addison Fox

Bright lights, big smiles and upbeat music: this is the atmosphere at the first ever body positivity fashion show hosted by the Organization of Women Leaders (OWLS). A variety of models of all shapes, sizes and colors graced the stage while the crowd cheered and danced along.

OWLS is an organization whose mission is to educate the community on what feminism is and  to promote activism and leadership among its members.

The event started with opening remarks from the OWLS executive board and a clip from a TED Talk with Ashley Graham. Members of the executive board discussed topics including body positivity, self love and the Shine Theory.

Shine Theory is the idea that women should build each other up and encourage each other instead of living in constant competition. This theory promotes the fact that other women’s success does not make your own success any lesser.

After introducing the theory, the diverse group of models each walked the stage while the crowd cheered with support for their confident strides and poses. Throughout the show, there was a visible increase in each model’s confidence that proved the crowd was boosting their self esteems.

After the show, OWLS raffled off a self-care basket and gave out free desserts. Everyone left the event with smiles on their faces and a better idea of their own worth.

Ren Crudele, the treasurer for OWLS, said over fifty people came together in order to make this event possible. Between the models, members of OWLS, and members of other RSOs that spread the word, the community pulled together to make the show a success.

“[Body positivity] is coming to an acceptance of who you are, both internally and externally,” she said. “I think it’s just coming to accept yourself and love yourself in the body that you came in.”

OWLS have two more events this week. There is a fundraiser at the on-campus location of Ponder Coffee Company on Thursday, November  15, from 7-9 p.m. with live performances from local bands followed by an open mic night. On Friday, November 16, there is an event called Letter Writing to Dr. Christine Blasey Ford in the Maroon and Gold rooms of the Bovee University Center from 7-9 p.m.