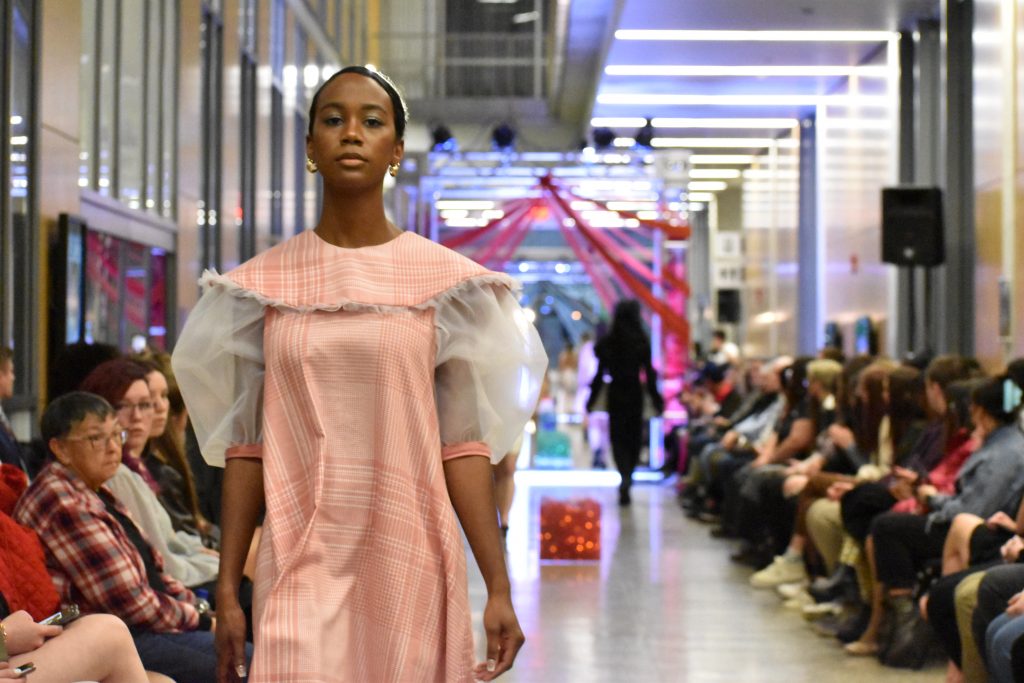 Story and photos by Maddie Lajewski

When selecting the theme for this year, all three producers had similar ideas.

“We all had the same idea, but never really talked about it,” producer Kate Castillenti said. “We had a gala event in November, then we have a production class that’s in the spring. So this has been going on since January.”

Morgan Boosamra is a junior fashion design student and this was her first year participating in Threads.

“I’ve always wanted to be a fashion designer, the kind that has fashion shows so this was my first opportunity to be in one and to get practice with it,” Boosamra said. “It’s also something to push me to make garments and to continue being creative. It’s a building experience.”

Her collection was called My Universe and was a part of the element Earth.

“When I heard of the elements, I figured people would be doing similar takes on it, so I tried to encapsulate everything in the Earth and in the universe, and kind of have a different perspective on it and incorporate a lot more colors into it,” Boosamra said.

On top of the 21 designers sharing their creations in the show, committee heads and producers had to keep track of 120 models. This was producer Rachel Zauel’s responsibility, which can be very overwhelming, she said.

“Being in charge of the model committee,  means I have to oversee 120 models, six people on the committee and trying to balance that with everything else that I have to do,” Zauel said. “Communication is really hard with that many people, but it’s definitely the most important thing.”

“My collection was inspired by pollution, capitalism and consumerism,” Christie said. “It kind of shows the aftermath of that. I kind of wanted it to tell a story, the beginning like nothing is affected then it goes further into pollution.”

Another designer for the element air had previous experience with fashion shows before coming to Central Michigan.

“I’m just a design minor,” Lauren Bark said. “We had fashion shows at my high school (Utica Academy of International Studies) so I got really into making clothes because it’s just fun for me.”

Bark focused on contrast to add emphasis for her collection.

“The name of my collection is Calm Before the Storm,” Bark said. “I actually was inspired by the element air, so I wanted to pull together the strength and the softness of air, so that’s why there’s a lot of metal detail, as well as pearls. It’s finding the balance between the two.”

Some students played multiple roles throughout the creation of the show, like designer and public relations committee member Carmella Contesti.

“It’s an amazing experience not only working behind the scenes but also as a designer and it’s a great way to show off our program,” Contesti said.

“[The inspiration] came from my grandma,” Contesti said. “She inspired me to sew because my major’s merchandising, but I design as well. She inspired me to actually design, but the collection itself is inspired by the element air.”

The Central Michigan fashion department is close partners with Carhartt, who watched the show via live-stream, as well as other virtual viewers.

“This is going to be the first or second time they’ve done the live stream, which is really exciting,” model Hunter Burns said. “FAMD (Fashion Association of Merchandising and Design) is the sister organization to Threads so we always try to support each other and spread awareness about both organizations, and how people could get involved. Threads is a really cool opportunity for designers, students, interior design students with courses that work in tandem with us to do the design of the fixtures and lighting. It’s really cool to see this all come together and all of the people who are involved, the joint effort that goes into something to show off our program and to show off our designers.”

Designers agreed upon gelled hair and simple makeup looks prior to the show since there are so many models and a lack of experience from students doing the hair and makeup. Kaitlyn Denzler is a licensed cosmetologist who helped prepare the models backstage.

“They wanted a lot of looks that were easy, capable, that people who don’t necessarily have a lot of experience doing makeup on others can do,” Denzler said.

It was a sold-out show, packed with faculty, family, and friends.