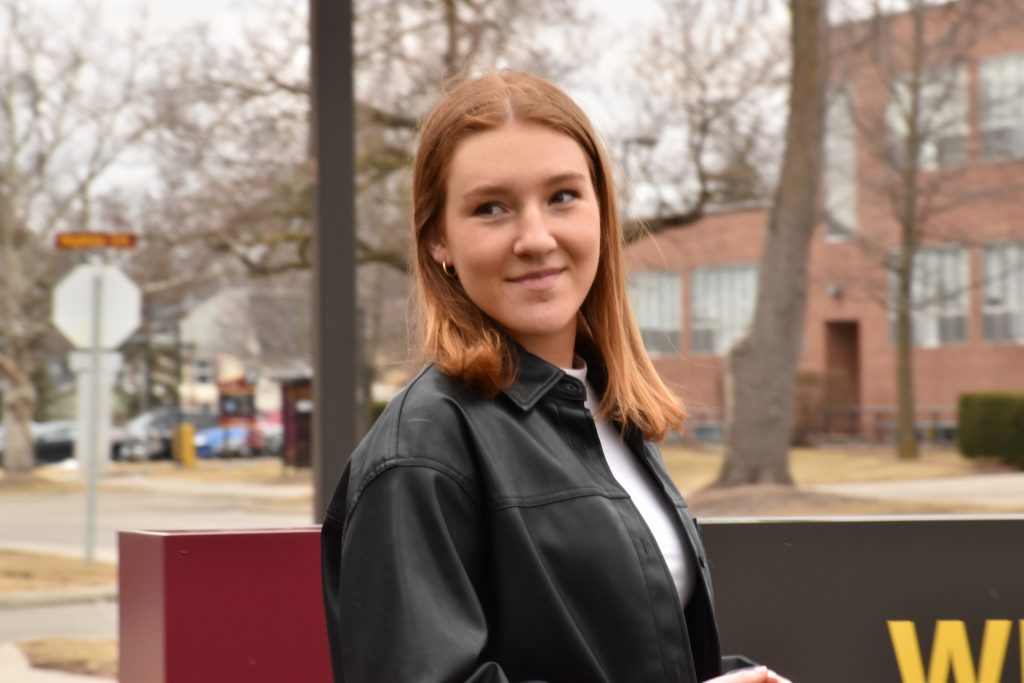 Central Michigan sophomore Sydney Theiler, 20, always knew she loved clothes. But she never thought that was something she could turn into a career.

“With fashion, I’ve just always been that girl who loves clothes,” Theiler said. “I never thought it was something I could pursue as a career. I thought I was going to go to law school or something like that. But when I heard about Central Michigan’s program, I realized it was a really good program. They’re ranked first in the state and are pretty highly known throughout the country, so I thought it was perfect.”

There are many layers to Theiler. She recently became an e-board member for the Fashion Association of Merchandising and Design this year, taking the role of social media editor. She is also a member of the campus sorority Alpha Sigma Alpha, again recently taking the roles of public relations chairman and scholarship chairman.

She is in her second year of studying fashion merchandising and professional sales. Theiler enjoys fashion and expressing herself, which is why she is pursuing a degree in the fashion industry.

“I’d like to be more involved on the marketing and sales side of fashion, so if I could be involved with a major department store or big buyers, that would be the end-goal,” Theiler said. “I would like to have a stable job set up when I graduate. I know with our internship we’re required to do our junior year, a lot of people make good connections with that, so they end up being hired after graduation.”

Other than wanting a stable career, Theiler said she hopes to travel more after obtaining her undergraduate degree.

“I would love to go back to New York, I’ve been there a couple of times as a tourist,” Theiler said. “If I could have any ‘in’ in the fashion industry in New York that would be pretty cool. I would also love to go to Chicago. Maybe somewhere on the West coast, like Seattle or San Francisco. The fashion industry is a lot different there than it is on the East coast, so I’d like to see both sides.”

Due to her major and interest in fashion, she is very involved in the fashion program on campus. Apart from being an e-board member for FAMD and a chairman for Alpha Sigma Alpha, last semester Theiler modeled in Threads, the CMU student-run fashion show. Theiler is involved in Threads again this year, being a part of the public relations and graphics committee.

“It was virtual,” Theiler said about her experience being in Threads. “I was a model in it. They had different filming days where we’d get dressed up obviously and they had different sets where they recorded us walking down the runway. Then we did some different shots. Then they put it all together and live-streamed it.”

Theiler’s colleagues think very highly of her. Her sorority sister Grace Futrell, 20, also knows her from herself previously holding the social media editor position in FAMD before quitting in March 2021, as well as sharing the same major, fashion merchandising.

“She’s probably one of the nicest people I know,” Futrell said. “I think she is just so loving of everyone, which is kind of hard to find nowadays. I think that’s really cool and sadly unique, but in a good way unique for her.”

Although Futrell knows Theiler from multiple organizations, Futrell said it is ironic that her sorority sister Theiler is taking on the former leadership role Futrell used to hold in FAMD.

“I know she took on the social media role for FAMD, so I think that’s really cool,” Futrell said. “I reached out and helped her a little bit with that just because I used to do that role as well.”

Since Theiler just recently took both of her leadership roles in FAMD and Alpha Sigma Alpha, Futrell said she is very excited to “watch her grow.”

“If I could imagine how she would be, I think she would be very understanding to everyone and wanting to listen to all of their opinions, and taking all of that into consideration before making an ultimate decision,” Futrell said about Theiler as a leader.

Futrell said that she looks forward to seeing Theiler grow as an individual and seeing what she can do as a leader in her multiple new roles.

“She’s so inspiring and she’s just nice to everyone,” Futrell said. “She is the type of person that no matter what, no matter where you came from, she’s going to be nice to you and respect you.”