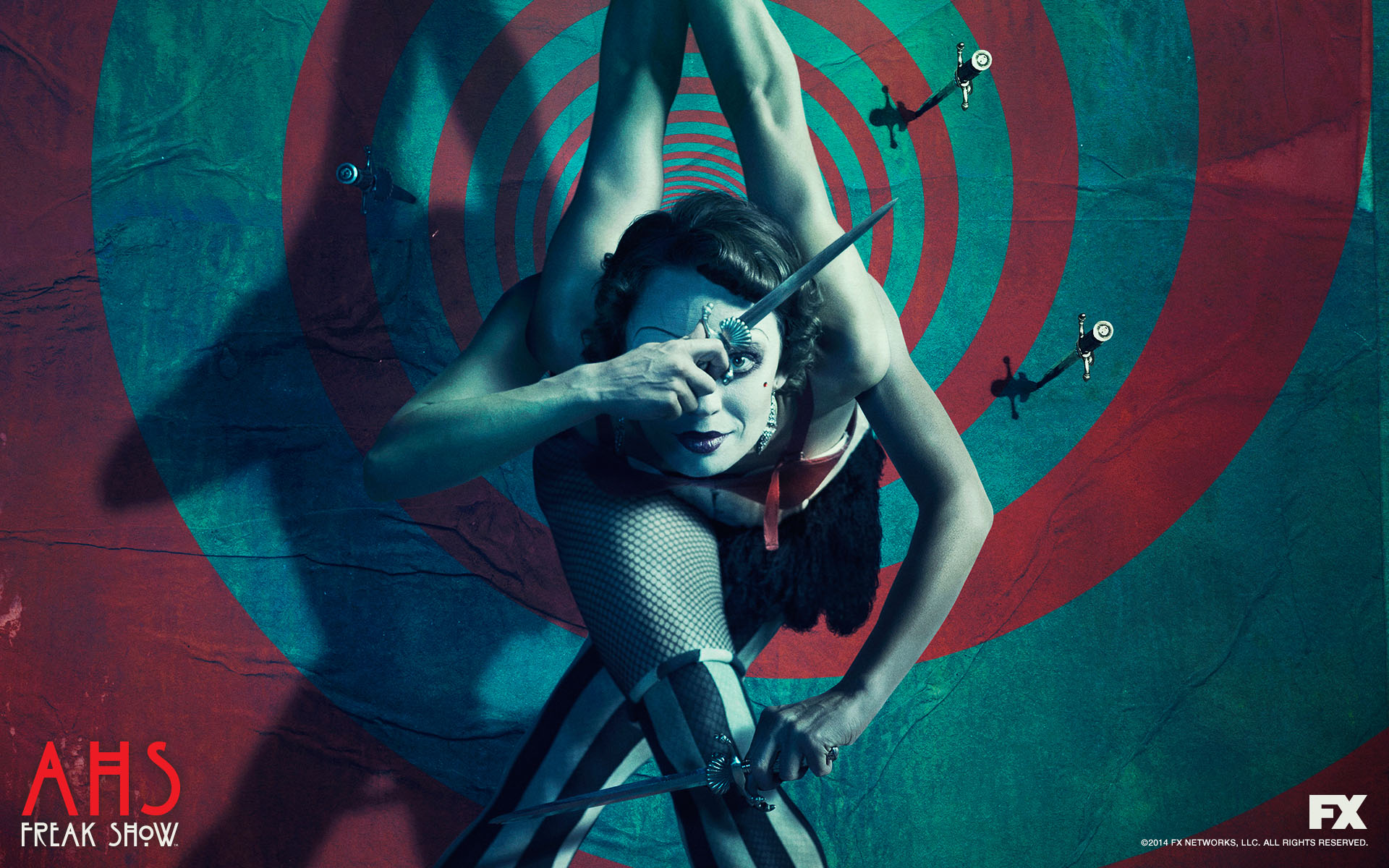 Come one, come all! See! The ever-multiplying romantic subplots!

Fear! The incredible sea of wrinkles that is Jessica Lange‘s maw as she devours entire gobs of scenery with a single gulp.

Dandy is attempting to court the Tattlers after Elsa sold them in the last episode. He doesn’t want to “defile” them, but he wants to try to love them in the chaste, “honey, I’m home” way he imagines relationships are in his sheltered, perfect movie world.

Bette is immediately all for it. The two fame-obsessed murderers (lest we forget, it was Bette who decided her mother needed a new hole in the neck) share meaningful glances and even rub fingers together in the comfort of a popcorn bowl. Yet, Dot still only has eyes for Jimmy, and merely tolerates Dandy with the hope that she’ll get enough money to (surgically) remove Bette from her life forever.

It’s the week of Elsa’s birthday, and the mandatory joy that would normally come with that has been dampened since the twins’ “disappearance.” Even the new target wheel act Elsa who has been put in the show for her promised variety hour isn’t cheering anyone up.

While at a local shop to find perfume for his lady, Paul runs into Dandy, who is buying two of every ladies’ product – raising suspicion that he has the twins.

Paul wisely confronts Elsa, and she becomes so enraged by her troupé not trusting her that she rounds them up, declaring no one is to leave their hostile meeting until someone gets on the wheel.

Paul wisely volunteers, thinking their trysts will stop Elsa from tossing a knife into his body. He’s wrong, and she “accidentally” sticks him in the belly.

For a character that just became fairly important to the story, Paul’s decisions sure are threatening to shuffle him off the show quickly.

Stanley wants Maggie to off Jimmy so they can sell the heartthrob’s lobster claws to the museum. She convinces her partner that she’ll drown Miss Petite (Jyoti Amge, the world’s smallest woman) in a daringly dark fantasy sequence.

When she finds that she can’t do it, she returns with the wee one in the morning and tells Jimmy she wants to run away together. Not bad, since she told him in the last episode that they couldn’t be together. Jimmy agrees, but says he needs to do something first.

Stanley isn’t thrilled about Maggie’s lack of results and tells her the hand-chopping plan is back on.

Dandy, meanwhile, is infuriated by Dot’s habit of keeping secrets. To settle this, he does what all proper suitors do: unbolts her diary, reads that she is repulsed by him and resolves that love isn’t in the cards for him. He then declares to his mother, “my place on the earth is to bring death.”

Good thing, too, as Jimmy shows up at the mansion to see if the sisters are really there. Dandy’s going to try to fill his kill quota for the day soon.

As candy-stripe girl ignores her emotionally abusive father’s wishes and visits Paul, Ethel informs Elsa that even she’ll be eternally grateful for saving her. With that being said, she also says that if she finds outs that Elsa purposely knifed Paul and had something to do with the Tattlers’ disappearance, she’ll kill her. What a fight that would be.

What do you think?

Are you amongst the legion that thinks Dandy is Dreamy McDreamerson?

What did you think of Paul and the candy-stripe girl? Do they have the potential to be the next favorite random romantic subplot?

Who do you think is the one Dell is apparently smothering from the preview of the next episode? (My guess is Salty, the companion to returning AHS character Pepper, Naomi Grossman, who appeared in season two).

Could that twist be what leads to the reappearance of “Asylum” fan-favorite, Sister Mary Eunice?

Tell us your thoughts (or incoherent ramblings) at @GCMagCMU