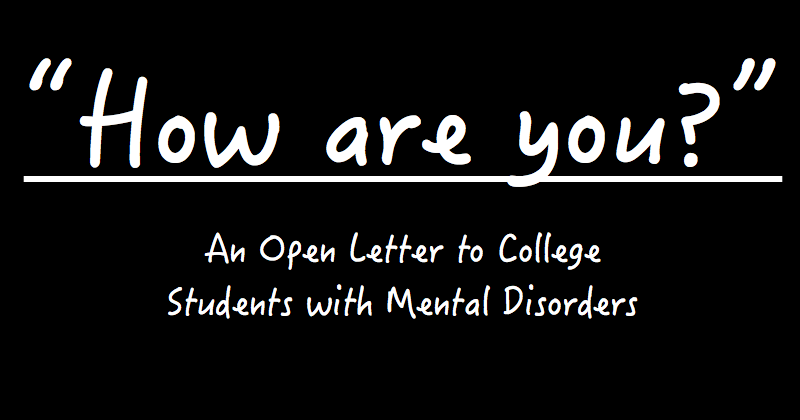 Hello, how are you? Those words may seem very rare to you if you feel that people don’t care enough to ask, or on the other hand it’s all too common for the multitude of therapists and hesitant inquiries of family members that have asked you this.

Either way, it’s a genuine question: How are you?

I hope you’re genuinely doing well and aren’t just saying it to avoid further questions, but in the case that you are, I want to remind you that the cliché saying holds true – it does get better.

I really want to avoid playing the martyr card to prove the validity of that statement, but I do want to offer you a real-life testament to this saying as well. I know this because I am currently an active, involved college student that still struggles with her mental disorders.

Last winter began my freshman year of college at Central Michigan University and was the peak of my mental struggles. Granted, I was going through some things that would make it impossible for a living, breathing human being not to feel something.

I was on the edge of losing my academic scholarship, among various other things. Yes, I became depressed. And yes, I became terrifyingly numb.

It was noticed by my friends and loved ones, as I constantly heard the “How are you?” question more often than not. In my state, however, it was equivalent to the mumbled sounds of the adults talking on “The Peanuts.”

I had “bad thoughts” – thoughts that usually consisted of aching to slip in the shower and never waking up. I rarely left my room or attended class. I lost 10-15 pounds due to stress or simply having no motivation to go down to the cafeteria and feed myself. I started losing pleasure in the things that I love doing. One of the worst parts of it all was that I found myself constantly snapping at my loved ones who were simply worried about my well-being.

I became a shell of my former self and I hated it.

To make an already long story short, I know what it’s like to hit absolute rock bottom. I know what it’s like to experience the worst version of yourself. I know how awful it feels to feel everything and nothing at all at the same time. It’s an indescribable feeling that only the ones that have felt it can fully understand. I know how your mind can hurt you more than any human possibly can, and it’s a scary concept.

But I also know how it feels to get better.

I know that wonderful feeling of both elation and pride when you receive your first “A” on a test in a long time. I know what it feels like to hear someone finally say, “I’m so proud of you” and mean it. I know what it feels like to say that same thing to yourself and mean it. I know how it feels to take a shower and start crying happy tears because it’s the first shower you took without thinking of ways to harm yourself.

I also know that as a college student, it seems even harder to deal with.

There’s such an abundance of pressure to fit a certain bill of approval, whether it’s inflicted by peers or the media. Society’s view on mental diseases is almost repulsively different from its view on physical diseases. The feeling of trying to explain to your professor why you didn’t complete your assignment with a doctor’s note in hand, and having your professor look at you skeptically or treat you like you’re using your disease as some sort of scapegoat is awful.

No, there is unfortunately no cure for any mental disorder. There’s no secret potion in the world that can permantely rid you of your disorder. However, there is a variety of treatment options that you can use. I chose to delve into my interests by becoming involved with Hall Council and writing for a school publication, while also using the counseling and medication route. Do whatever works best for you, run with it and utilize it to your best advantage.

I also realize that everyone’s mental struggles differ. Mine was consistent with the labels of anxiety, depression and bipolar disorder. There’s a plethora of mental disorders to be labeled with and there’s still many that we don’t know the full extent of.

Nevertheless, there are ways to feel better for every single one of them. You have the sole power to fight against your disease’s agenda, and that in and of itself is pretty darn rewarding.

And so, friend, whether you’re still residing at rock bottom or not, there is one thing that we all have in common – you are not alone, people care and it does, in fact, get better.

With sincere love and good wishes on your journey,