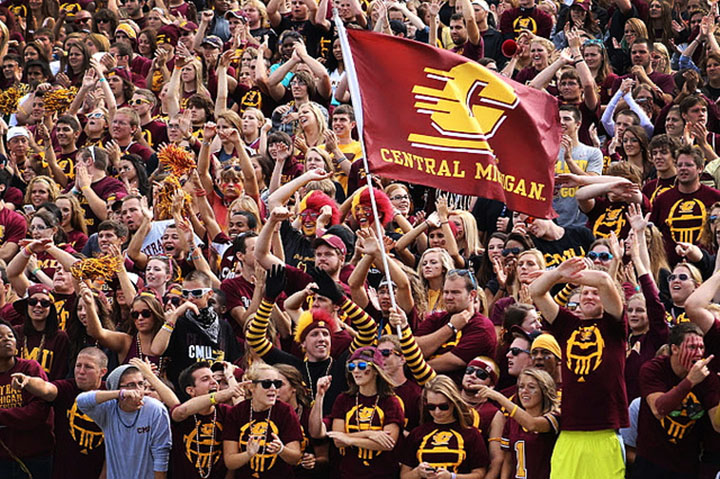 Central Michigan found themselves up 21-0, in a huge road game on the other side of the country. Cooper Rush was not missing a beat since entering the game Sept. 7 down 13-0 against New Hampshire.

Then UNLV switched quarterbacks to start the third drive of the game. This sounds all too familiar.

After entering Caleb Herring went an astonishing 24 for 28 for three touchdowns with 266 yards passing. Herring led UNLV to 31 answered points en route to a 31-21 victory, the second biggest comeback in UNLV football history. On Monday, Herring was named the Mountain West Conference offensive player of the week for his performance.

With that said, it should be pointed out to everyone crying foul, this was Rush’s first career start and that two weeks ago he was the third-string quarterback.

Central Michigan did exactly what they needed to do on Saturday to come back home with a win—they came out hot and had a big lead. Rush was playing very efficiently and he was getting the ball to Titus Davis.

Rush finally looked mortal in the second half as Central deteriorated and lost seemingly all the fight that they had left in the tank.

The ball was just not moving down the field and Rush could not get anything going. He completed just nine of 24 passing attempts in the second half with two interceptions. Rush finished 23 for 46 with 265 yards passing, one touchdown and those two costly interceptions.

There is one key issue with Central Michigan—there is only playmaker on the team. Rush and Saylor Lavallii are very good players but neither of them have that big play ability. Rush had a 5.8 average on passes completed and Lavallii averaged 3.4 yards per carry.

Davis is the only home-run threat on this team, scoring one touchdown on eight catches and 116 yards.

A loss like this does not spell the end for Central Michigan but it should be a wake-up call. You can’t take any game or possession for granted. Rush needs to focus on his first and second half like they were two different games.

Focus on the good from the first half and find out where you went wrong in that disastrous second half.

Things don’t get any easier for the Chippewas as they host the University of Toledo at 12:00 p.m. on Saturday, at Kelly-Shorts Stadium. This will be Central’s first Mid-American Conference game of the season.

Toledo is a team that is always competitive in the MAC and this year is no different. The Rockets have had a brutal schedule coming into the fourth game of the season. The first two games of the season saw Toledo play on the road in Southeastern Conference stadiums.

In game No. 1 Toledo lost in “The Swamp” to the University of Florida, 24-6. Then the Rockets traveled to the University of Missouri and lost 38-23. These scores may not look that close to the untrained eye but there are two major factors to take out of those two losses.

The Swamp is regarded as one of, if not the toughest stadiums to play at, in the country. So holding Florida to 24 points while remaining competitive and keeping the crowd in it, is more impressive than you would think.

Then you look at the Missouri game and you see that the score was 17-9 at halftime. This is an SEC team, sure Missouri hasn’t been a consistent top threat but the Tigers have always maintained a quality program.

These two early tests will have Toledo more than ready for Central Michigan and the rest of the MAC.

Central Michigan needs to get the ball to Davis. He is clearly the most talented player on the field and needs to be force fed the ball like broccoli to a toddler. Davis is averaging 20.5 yards per catch and I know everyone is pointing to that 97-yard touchdown catch in week two for the inflated numbers, but he had 14.5 yards per catch against UNLV on Saturday.

Davis needs to continue to receive double-digit targets per game because this is a young team without playmakers. He can open up so many holes for the rest of the guys on the field.

There are no weeks off in college football. Hopefully taking the second half off on Saturday night taught the Chippewas that you can never take your foot off the pedal, no matter how big of a lead you hold.