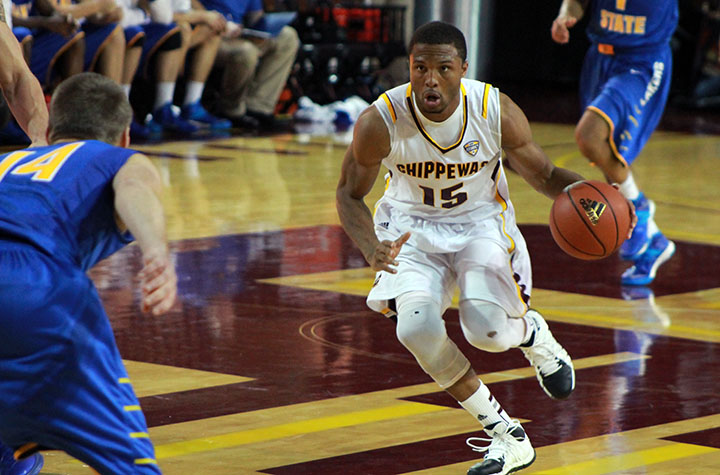 Through confidence and the chemistry between him and his teammates, sophomore guard Chris Fowler led Central Michigan to a victory over Lake Superior State with a 92-88 overtime win in Monday’s exhibition game at McGuirk Arena.

The 6’1″ sophomore point guard had 25 points, six assists and went 7-of-9 from the free-throw line.

The Southfield native was happy that Central Michigan won the game but knows the team can play harder.

“We’re going to be undersized all year,” Fowler said. “One thing we know we can’t do for the rest of the year is to get outworked, so that’s something we’ll have to come back to practice and work on.”

The 15-player roster composed mainly of underclassmen has strengthened their skills over the summer, but have still found things they can improve on.

Central Michigan got off to a slow start and Fowler didn’t give the team its first points until he made a layup with 16 minutes and 45 seconds left in the first half.

At halftime, the Chippewas found themselves down 42-31.

However, the pace eventually picked up when the team found its rhythm. From circulating the ball well to communicating effectively with one another on court; Central Michigan managed to get things rolling and make a comeback that would eventually lead to an overtime victory.

“We played a lot of guys and we got confidence on everybody that comes on court, so we felt like we were the freshest team, especially in overtime when we came back,” Fowler said. “The credit goes to the guys that we have on the team that never stop fighting and believing in one another.”

Central Michigan coach Keno Davis agreed this was the perfect exhibition game to have before the actual season kicks off due to the competitive nature of the game and it offered crucial crunch time experience.

Davis said the team has a lot of progress to make in order to be the best team they can become.

“As I look at our team, we’ve got a lot of work to do but we understood coming into an exhibition game, where we are as a team,” Davis said. “Seeing some of our weaknesses that Lake Superior was able to exploit, we’ll go back to the practice board and the video session and see how quickly that we can resolve some of these deficiencies.”

Over the summer, Davis said he has noticed the improved skills of several players.

Davis said he’s also seen an improvement in the game of Fowler, who is coming off of an impressive freshman season.

“I think Chris Fowler is much improved and that’s saying a lot off of the season that he had,” Davis said. “But he works as hard as anybody probably that I’ve ever been able to coach. Chris (Fowler) will only get better as the season goes on, he’s becoming more of an all-around player.”

Over the summer, Fowler was working on improving his offensive game in addition to his mental focus, confidence and preparation for the season. Though the exhibition is only practice for the upcoming season, Fowler decided to look at it as an actual game making sure he and his team made the game count.

“We don’t want to waste any days getting better and trying to improve on what we got to do,” Fowler said. “So it might not count toward an overall win-loss record, but it definitely counts toward us improving.”

Fowler takes no credit for Monday’s exhibition win. Instead, he gives the credit to his teammates.

Fowler knows he is still bettering his game each day, acknowledging that he made some mistakes on Monday, as he turned the ball over four times. However, he and his teammates are working to correct those mistakes, and that in itself has led to better team chemistry.