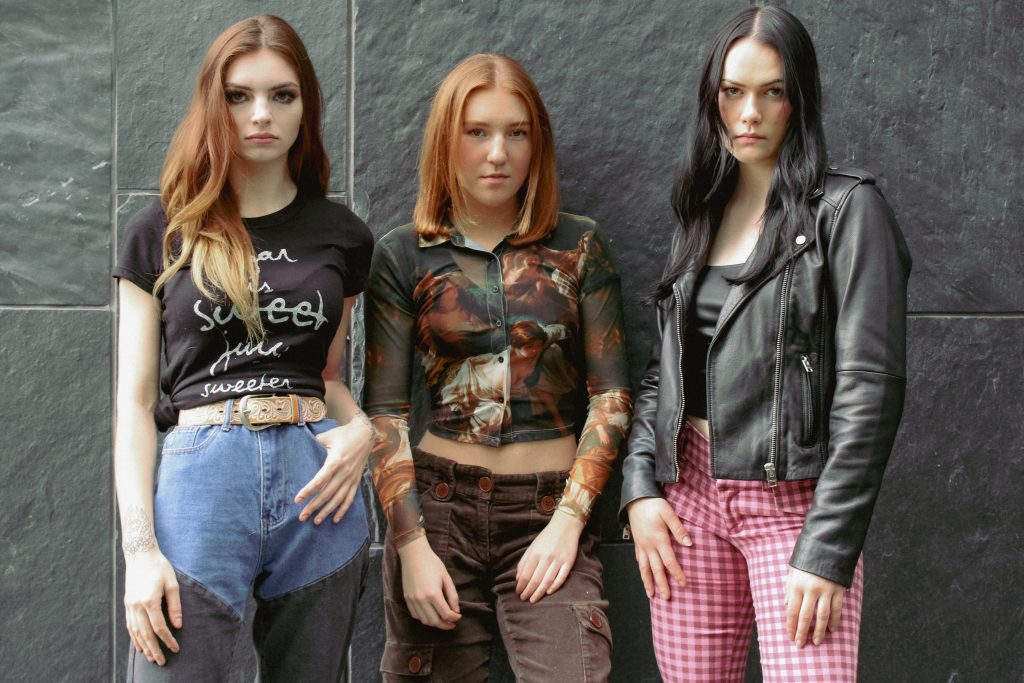 Threads Fashion Show is a class offered within the fashion design and merchandising college at CMU, although it is open to all majors and anyone who is interested. It is considered one of the main highlights of CMU’s fashion college. This year marks a major milestone for the show: 25 years of Threads.

The three producers for the 2023 show are all experienced Threads members: Cassidy Marshall, Sydney Theiler and Lauren Bark. They all got interested in fashion differently, ranging from prior experiences in high school to simply having an appreciation for couture.

Marshall was unsure of the career path she wanted to take once arriving at CMU. Before learning about the fashion merchandising major, she thought about teaching.

“Fashion was everything I’ve done,” Marshall said. “I thought maybe I should go for it.”

Marshall first heard about Threads during her freshman year at CMU. That year she planned to submit her designs to Threads to be judged, but did not. Despite her efforts, she didn’t think her sewing skills were the most impressive.

“I was in the middle of transitioning from all the wrong techniques I taught myself,” Marshall said. “I felt messy, and I didn’t like the way my collection turned out.”

Because of COVID-19, Marshall had taught herself how to sew during her virtual classes.

Although she experienced this rough patch, she did not let it stop her. Marshall came back the next year with an impressive collection that scored well with the judges. This year, she will participate again, but as a producer.

Lauren Bark is a senior in the fashion merchandising college, with a minor in fashion design. Her interest in fashion started in high school, where she was involved in her high school’s fashion show.

“It was a really low-scale one, but that’s when I kind of knew I wanted to pursue a fashion career,” Bark said. “I was also really inspired by my love of couture fashion and watching every fashion week’s runway shows, I really enjoyed that. That is my holy grail in the fashion world.”

Since then, her interest in the fashion world led her to Central Michigan’s fashion merchandising studies and eventually to designing for Threads, being the venue director for last year’s show in 2022 and now becoming one of the producers of Threads 2023 fashion show.

“What drew me to Central was literally Threads Fashion Show,” Bark said. “I knew about that as a high school student and thought the program was attractive. I thought I would have some really great opportunities.”

Even though being a producer comes with its challenges and its responsibilities, Bark is confident and able to overcome them.

“I think that’s the same with all three of us producers,” Bark said. “We love it so much that we want to be producers and take on that role. It’s been an honor.”

Sydney Theiler started as a model for the Threads 2021 show, Lucid Dreams. Last year she took the production class, and was on the public relations and graphics committee. She enjoyed the behind the scenes aspect of the shows, which led to her applying to be a producer for this year’s show.

“There were a lot of learning experiences last year,” Theiler said. “I would say the biggest thing is communication among the production team, especially throughout the different committees. We’re all doing something completely different, but at the end of the day we’re all planning the same fashion show. As a producer myself and the other two producers, we really want to focus on making sure everyone communicates really well within the organization, so that it can run really smoothly and people on the outside can’t see when we’re stressed. I guess pushing creativity, innovation and trying to reach a broader audience on campus. I feel like there’s still so many students who don’t even know what Threads is. Being a fashion student, that’s all I hear about. But when you go out into different majors, they really might not have any idea. That’s another big goal is to get a wide range of students to at least know what Threads Fashion Show is. Hopefully they’ll come to the show or maybe they’ll want to participate.”

Earlier this year, Theiler and other Threads students had the opportunity to participate in different shows for New York Fashion Week.

“Our advisor had a connection with a dressing company in New York City,” Theiler said. “He got to take us and we were professional dressers behind the scenes of big New York Fashion Week shows, including Fendi, PatBo, Prabal Gurung, and Badgley Mischka. That was really cool, being able to see how professional fashion shows are produced, seeing the behind the scenes of how things are run. It was really special to compare what we do at Threads to what they’re doing in the industry because we uphold a really professional show. We’re very organized, we do things basically how they’re doing them in the industry.”

Theiler looks forward to applying many of her learning experiences during her time at New York Fashion Week to this year’s Threads show.

“I definitely learned a lot just observing from behind the scenes,” Theiler said. “I think there’s a lot of organizational tactics that we can apply in this year’s show, a lot of different things they have implemented on show day just to make things run a lot smoother. It was really inspiring to be there. To be able to say we are up to industry standards with what we’re doing. We have this great opportunity here on campus to get experience with these fashion shows that will help us in our career, which is really vital, and just promoting creativity and innovation year after year to make the show the best that it’s ever been.”

The Threads advisor is and has been since 2015, Dr. Ian Mull. Although Dr. Mull is an experienced professional and oversees Threads in general, it is mainly the students involved who create and run the show.

“He knows a lot, he’s seen the shows year after year,” Theiler said. “So he knows what works and what doesn’t work. He’s there to guide us in that right direction, and encourage us to make the most logical decisions and make sure we’re staying on track. But after that, he really allows us to do as much creative planning as we can. He gives his input and we really do value his opinion because he’s very experienced, but at the same time he allows us to go in what direction we want to, which I really respect. Even if he disagrees with a decision we make, usually if it’s unanimous he allows us to make that decision. If it’s a mistake, then it’s a learning experience for us. But he’s been really great just guiding us through the whole process and being a mentor to look up to.”

One of the main responsibilities of the producers is selecting the theme of the show.

“Our theme is Cosmic Odyssey: Fashions Final Frontier,” Theiler said. “It’s basically a journey into space, exploring the limits of fashion. It’s the 25th anniversary of Threads fashion show, so we’re really trying to plan a big show and get a lot of people involved. It’ll be in Finch Field House on April 15. We’re really excited about the theme and a lot of the designers are really excited. We’re hoping to get a good turnout.”

Marshall hopes the audience is blown away by this year’s show. As a producer, she hopes to achieve a better experience for participants and viewers.

“It’ll be the best night ever,” Marshall said.