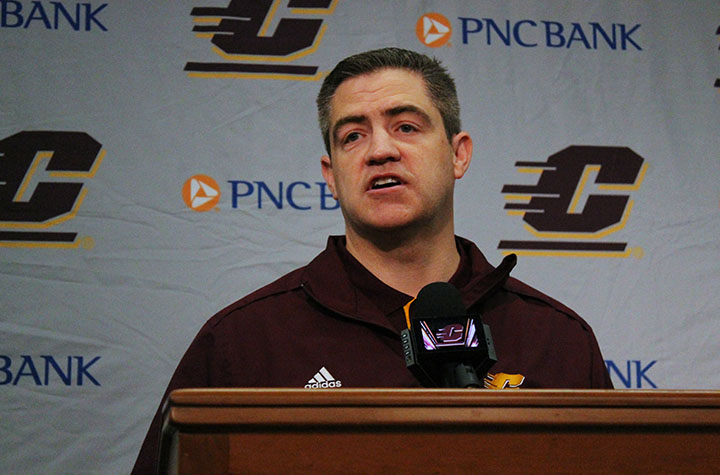 In Keno Davis‘ first year as coach at Central Michigan the team went 11-20 overall and 4-12 in the Mid-American Conference.

One of the biggest improvements in the basketball program was off the court and in the classroom. Central Michigan was one of 19 schools in the NCAA to be awarded the Team Academic Excellence Award, meaning the cumulative team grade point average was above a 3.0.

“This accomplishment is a testament to the character of our players,” Davis said. “We wanted to put the student first when it comes to our student-athletes.”

On the court last season, Central Michigan finished sixth in the conference on offense and last on team defense. It was a transitional season as Central Michigan played six freshmen over the course of the season after firing Ernie Zeigler in the offseason.

“Last year being able to put a team together with only three or four returning players was a great job by our assistant coaches who don’t get enough credit for their hard work, ” Davis said. “We believe that we’ve accomplished putting a product on the floor that can be successful and also set the tone for years to come. ”

One of those key returning players is sophomore point guard Chris Fowler, who averaged 8.1 points per game and a team high 5.7 assists per game. Fowler is surrounded by a supporting cast who loves to and is more than able to shoot from beyond the arc. Central Michigan ended the season with 754 three-pointers attempted which was the 10th most in the nation.

“There isn’t one player that needs to step up and become the conference leading scorer for us,” Davis said. “Fowler is fitting into his same role as a leader and distributor.  He could get two to three more points a game by just the level of  improvement and not even hunting for extra scoring opportunities.”

Fowler will see even more opportunities with the ball in his hands this season with Kyle Randall now looking to play at the professional level. Randall led the team and the conference in scoring at 18.7 points per game. He played three games with the Sacramento Kings in the NBA summer league.

The Achilles heel for Central was on the defensive side of the ball last year as they gave up the most points per game in the MAC at 71.8. On defense, the main obstacle to overcome was the lack of size.

Saylor was granted an extra year of eligibility in the offseason and now enters his sixth season with Central Michigan as a graduate student. Providing a critical level of leadership and experience to a team that only features three upperclassmen.

Also adding to the size is incoming freshman center Milos Cabarkapa, who is listed at 7’0″ and 233 pounds. Cabarkapa played last season at the Impact Academy where he averaged 14 points and nine rebounds per game. He is originally from Belgrade, Serbia.

“Milos is one of the guys that has gained the most from the new NCAA rules,” Davis said. “We’re now allowed to start practicing two or three weeks earlier than usual. The extra practice time has been invaluable for this team considering most of our guys are underclassmen.”

Cabarkapa has been a major beneficiary of the extra time allotted as he put on 30 pounds through the strength program under the leadership of Taylor Larson in the summer. His size will be a major addition for Central Michigan this year for a team that was regularly starting guys at center between 6’6″ and 6’8″.

“The hardest transition for me has been adjusting to the speed and size of everyone. I need to work on my conditioning more than anything,” Cabarkapa said. “I want to play as much as possible this season but my goal is always putting the team first.”

Central Michigan hosts an exhibition game against Lake Superior State on Oct. 28, at 7 p.m. at McGuirk Arena. The first regular season game is Nov. 8, against Manchester.

“The last three years we were only averaging about 12 home games total,” Davis said. “This season we’re looking at  15 or 16 home games. We really  wanted to give our fans and students more of a chance to embrace basketball.”