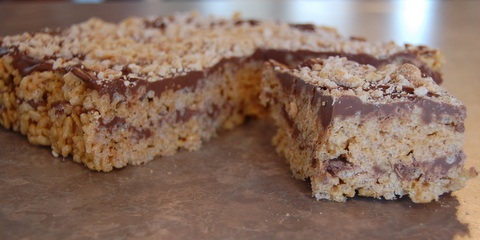 I am a peanut butter freak, whether it’s creamy, chunky, with pretzels, on a sandwich or even right out of the container on my finger.  Peanut Butter’s best friend is of course chocolate.  So when I saw this recipe for Puffed Rice Bars with peanut butter and chocolate I knew this was something I had to make.  Rice cereal bars are something that I have previously made, but I could not resist these! They are different than the standard bar because you have to make sure to just warm the peanut butter and to temper the chocolate. I had everything spread out in front of me, stole a spoonful of peanut butter and started baking.

Butter an 8-inch square baking dish. In a large pot, combine marshmallows, peanut butter, butter, and salt. Cook over medium, stirring, until melted, about 4 minutes. Add cereal and stir to combine. With a wooden spoon greased with cooking spray or oil, press half the cereal mixture into dish. Spread half the melted chocolate on top. Repeat with remaining cereal mixture and chocolate; sprinkle with peanuts

With a standard batch of puffed rice bars you can just let the marshmallow sit, with these it is important to watch it because of the peanut butter. It was easy to just make them like any other bar by mixing the cereal into the mixture. When it comes to tempering the chocolate I used a technique I stole from Ina Garten on the food network. What you do is put half of the chocolate chips into a microwave safe bowl and melt the chocolate for 30 second intervals, stirring in between each interval. Once the chocolate is melted stir in the other half and the heat from the melted chocolate will melt the second half. Stir until there are no lumps in the chocolate. The chocolate spreads easily and the crushed peanuts add the perfect touch.

I had five people taste the Puffed Rice Bars with Peanut Butter and Chocolate and rate them on a scale of 1 to 5- 1 being the lowest 5 being the highest- on overall taste, texture, appearance, quality, and willingness to try making recipe. I also had them make comments on what they would change about the bar.

Some comments I got about the bars was that by using an 8×8 pan the bars were too tall making them hard to bite into. I personally found that I wish they had more of a peanut butter taste. There was a hint of peanut butter but I would have loved for them to taste just like peanut butter rice cereal bars. The chocolate on top was great though. Overall I enjoyed this recipe. In the future I will put more peanut butter in (you can never have enough) and I will use a larger pan and make the bars bite sized. This recipe is going to make it in my book, but with my notes added.