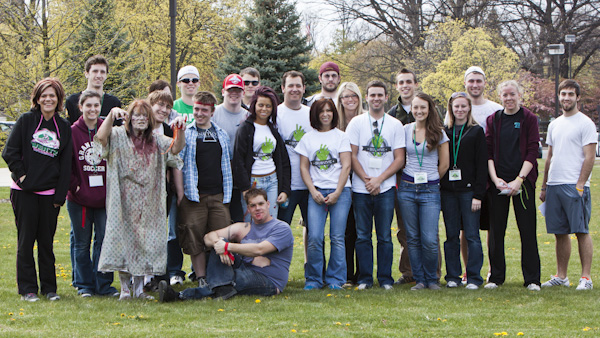 Survive Mount Pleasant is a zombie apocalypse survival game that took place across campus on April 13. In the beginning, participants choose to be either survivors or zombies. All the proceeds from this event go towards benefitting Special Olympics Michigan.

Flat Rock senior and creator of Survive Mount Pleasant Keith Guyot was pleased with the overall turnout of the event, but mentioned he’d love to see the event grow to 50 or even 100+ participants.

“It’s all for a great cause, for Special Olympics Michigan,” Guyot said.

Survivors started out at the University Center and had to proceed to two checkpoints around campus without being bitten by a zombie and then crossing the finish line at the third checkpoint. Zombies had one goal, to “bite” anyone in sight and turn the survivors into zombies as well.

“It is amazing that the zombie films and literature I have studied will come to life at an event benefitting an excellent organization,” Guyot said. “Zombies have a special place in my heart.”

Traverse City senior Ian Wolf was the survivor who ran away with first place, not being bit by any of the roaming zombies.

“It was very frightening,” Wolf said. “It was a great way to be supportive [of Special Olympics] and have fun.”

Jerome junior Brian McKnight worked with Wolf up until the end of the game. When both were cornered and surrounded by zombies, the two had to run through a mob of them to reach the finish line. McKnight fell slightly behind, but overall ended up coming in second place.

“I find it inspiring that these people want to do the same things as everyone else,” McKnight said when speaking about the Special Olympics.

Farwell resident Toni Graham, and winner of the Best Zombie Costume award, came out to help support the event as well dress up in full zombie attire and makeup that took her over two hours to put on.

“I just like to creep people out,” Graham said.

When referring to her zombie game plan, Graham said she was going to take a slower approach.

“I’m more like a Walking Dead zombie, not a 28 Days Later one,” Graham said.

Traverse City sophomore, Kyle Hallman was sent a Facebook message about the event and decided that he would participate in the event based on his love of anything to do with Halloween. Hallman decided to be a zombie in the game.

When asked what his zombie duties included Hallman answered, “I’m going to be trying to catch runners.”

After the event, many of the participants offered useful ideas to Guyot on what would make the event run more smoothly and efficiently.

Many mentioned that checkpoints across campus should have been marked with a flag and not a person (who may have blended in), as well as the chosen checkpoints be bigger landmarks and easier to find places for the non-students who may be participating.

Another area of concern was the amount of people who showed up. With only six zombies and nine survivors, the entire group thought the game would be more fun if many more people attended.

“Imagine if all 100 people on the Facebook event page would’ve shown up,” Guyot said.

With this event being the first of its kind for Guyot and with the consensus of the group, another Survive Mount Pleasant event is tentatively set for next October closer to Halloween.