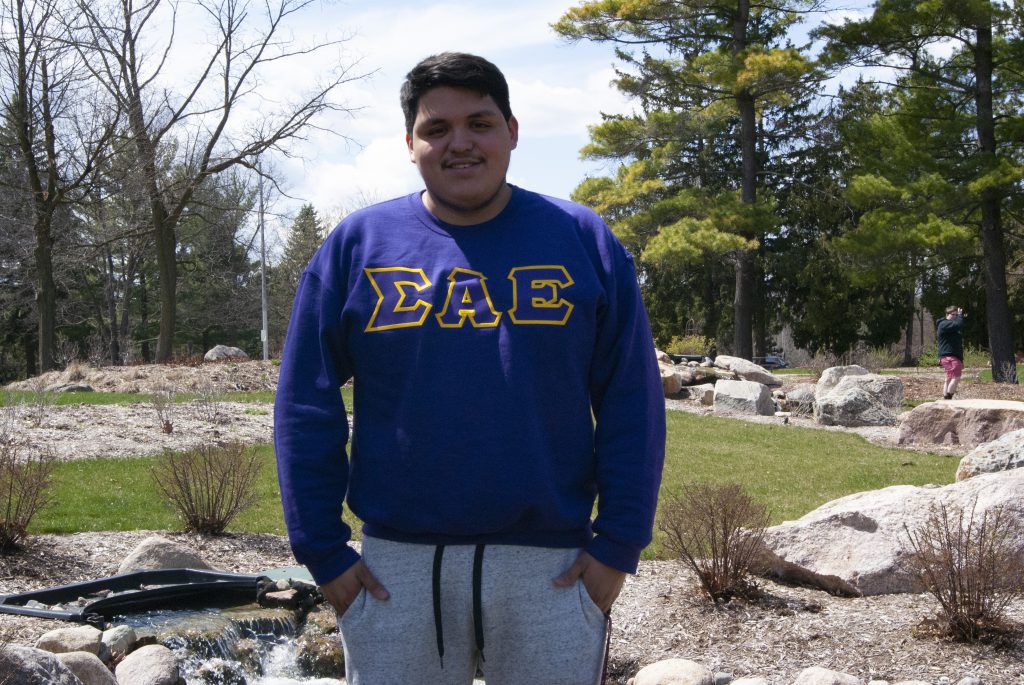 Story and photos by Rachel Bednarz

Central Michigan University students discuss why they joined Greek life and the reasons that they incorporate their letters into their personal style.

“Both my siblings were part of [Greek Life], and they both had really good experiences being involved with it, so I wanted to have those same experiences,” she said.

One experience and tradition across Greek life is receiving an article of clothing with the sorority or fraternity’s letters across it from your big after initiation. Klein said that receiving a set of letters from her big, CMU alumna Holley Martynuik, left her feeling loved and excited to be an active member of her chapter.

Klein said she incorporates her letters into her outfits at least once a week, but when it’s cold out she can be found wearing her crew necks almost every day.

“I don’t really have a ‘style’,” Klein said. When she wears her letters, she usually pairs them with leggings or a pair of jeans. 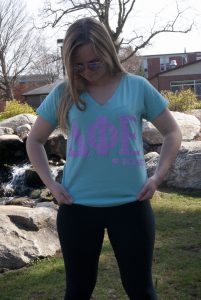 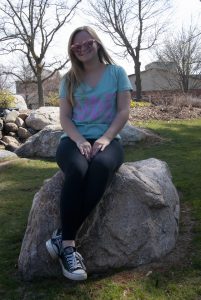 For Klein and other Greek life members, the clothes they receive from their fellow chapter members, or purchase themselves, hold more meaning than an everyday t-shirt. 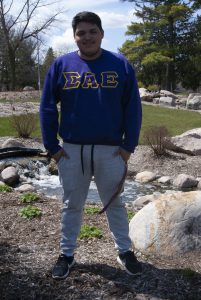 Sophomore Kevin Bautista-M. also feels a special connection to his chapter which he displays by wearing his letters.

“My parents were opposed to it, but I still did it. I feel like it has probably been one of the best decisions I’ve made,” Bautisita-M. said. He never had brothers at home and felt Greek life would be a good place to form brotherly bonds.

Bautisita-M. said that he likes to wear his letters about twice a week- if his laundry cycle permits. His favorite piece is a blue crew neck with the Sigma Alpha Epsilon letters in gold.

Bautisita-M.’s letters fit into his style because he is always wearing crew necks. Now he can reach for a crew neck that’s comfortable and reminds him of an organization that has impacted his life.

“I like to wear my letters to represent my chapter- to represent that I am a part of something,” Bautisita-M. said. He said that part of the Sigma Alpha Epsilon creed is to be a good gentleman, and he feels like he is representing that when he wears his letters.

When Bautisita-M. wears his letters, it reminds him of everything that he’s done for the organization and everything it has done for him.

Farstvedt joined her chapter to get more involved and to meet more people with varying interests.

“I know that my fraternity is full of teaching majors, but we all have different areas of interest,” she said. “I think that this is a good way for me to make connections in the teaching field and get to know what other things the teaching degree has to offer.”

Farstvedt wears her letters about once a week and incorporates them into her style by picking neutral colors. “I really like to choose more simple colors like greens, blues, and grays because I want to make sure that they go along with a lot of my outfit choices,” she said.

Farstvedt enjoys the freedom in picking what her letters look like so that she can match them to her personal style. While she likes to stick to more simple styles, sometimes she does go for a more patterned piece.

In order to become a full member of her chapter and earn her letters, Farstvedt had to earn points in areas such as professional development, community service, social and others. Because of this, she feels proud to wear her letters because they showcase all that she has accomplished and the work she put in to earn them.