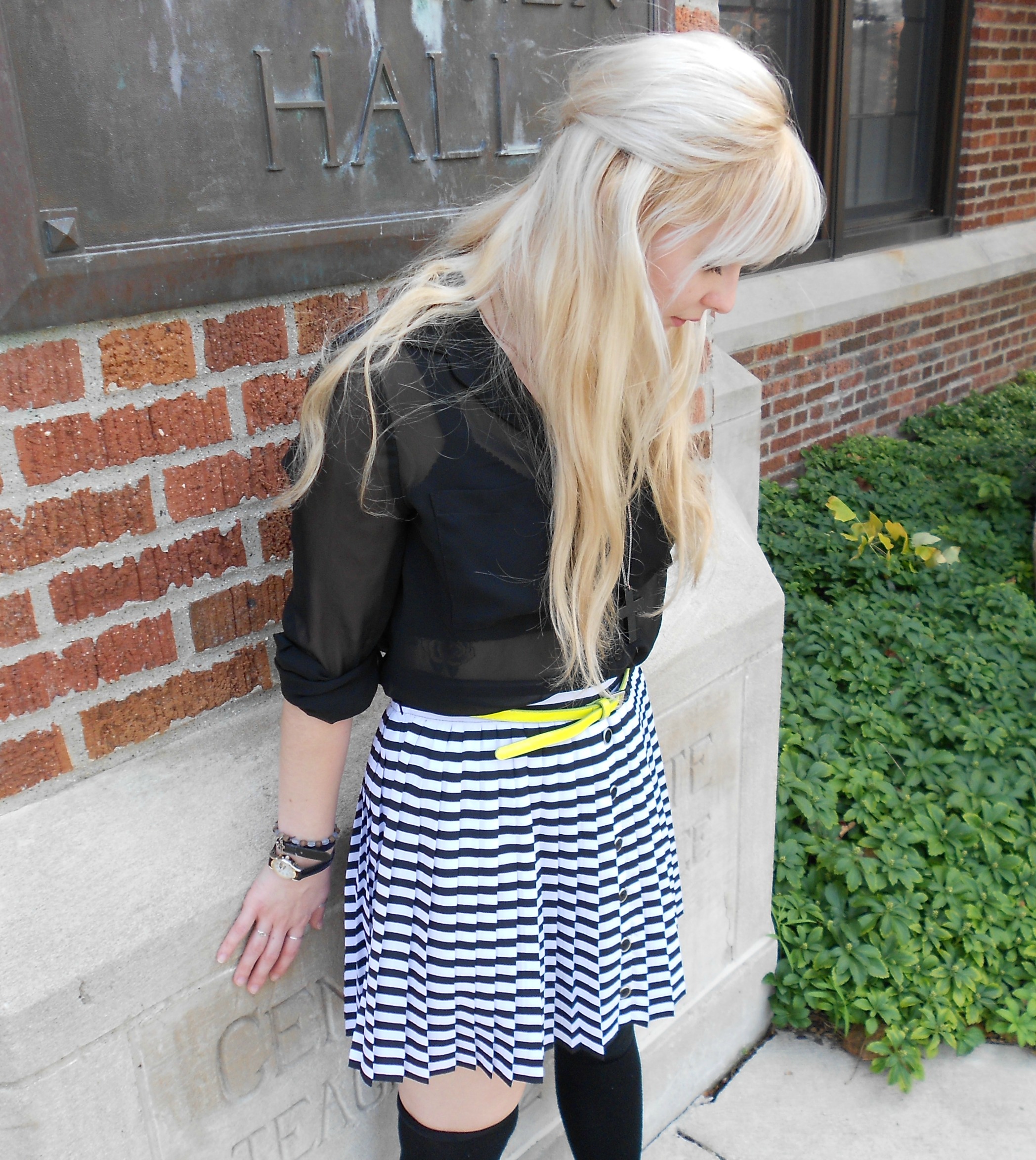 Few people can be dainty and delicate while remaining edgy and bold all at once. However, this describes one apparel merchandising and design student on Central’s campus.

With her unique style and signature blond hair, it is only fitting for Escanaba junior Nan Piehler to be in the Student Style Spotlight.

Originally from a small town outside of Pittsburg, Piehler is taking on the merchandising and design double concentration here at Central. She once wanted to be a wildlife biologist, but found her admiration for fashion her sophomore year of high school.

“Fashion is how you express yourself and your inner values,” Piehler said. “You can do what you want to do.”

Piehler’s sewing experience and enthusiasm for fashion fueled the change in her career path.

“I was about seven when my mom started teaching me to sew,” she said.

Piehler found her calling along with her personal style. From observing “planets week” as a child — during which time she dressed like the planets in the solar system — to her current style, Piehler’s unique look began to unravel through high school.

Piehler believes every girl’s wardrobe should include three essential components — all of which are black. A black top, black skirt and black tights are important to Piehler, as “they go with everything.”

When building her wardrobe, Piehler searches stores like H&M and Forever 21, because they are on the cheap side. Piehler says they offer trendy styles like what is seen in the magazines for less.

“I also like Urban Outfitters, but they’re more expensive,” she said.

Of her entire wardrobe, a pair of Coach wedge heels is the most prized accessory — an item that her aunt insisted on buying for her.

“I wear them all the time,” Piehler said.

Though Piehler may search for the cheapest way to be high fashion, she still has favorite high fashion designers.

“I like Anna Sui,” she said, explaining that her personal style resembles that of Sui’s designs. “I also like Alexander McQueen and Alexander Wang. I like weird things.”

As Sui, McQueen and Wang have done, Piehler is working toward the future, in which she sees herself with her own clothing line.

“It would be surreal,” she said.

Piehler knows how important the role of education plays in achieving her life goals.

“Every class requires different energy — you have to switch your mindset,” she said.

With little hesitation in admitting the difficulty of Central’s apparel curriculum, Piehler becomes stressed quite a bit and says that it can be expensive.

But her goals keep her focused.

Working hard to learn the proper techniques, Piehler explained how much she appreciates the coursework, and the hard work it entails. By no means is she burdened by the work that comes her way. In fact, Piehler says the sewing courses that she has taken have been her favorite so far because of the calming effect.

“I can just work; they’re the only classes I truly enjoy,” she says.

Piehler uses techniques she learned while studying abroad this past summer at the Paris American Academy in France. There she learned many fundamental techniques, which include hand sewing, and haute couture techniques. She uses these practical approaches in her current sewing classes, which shows just how beneficial studying abroad can be.

Piehler’s trip abroad was her first huge experience with fashion and design, as she is from a small town. Thus, studying in Paris allowed her to experience the big picture. Though studying abroad can be quite expensive, she says it’s worth every penny.

The experiences gained have impacted her career so much so that she plans to continue to experience the world during her career to further gain inspiration.

As with most fashion enthusiasts, much of Piehler’s life revolves around fashion. Still, she finds time for a hobby that she has enjoyed since being a child — reading.

“I didn’t grow up around a lot of kids. I had to entertain myself,” she said.

With her experiences under her belt, and her goals in foresight, Piehler continues to work toward her longtime career goals.

To fellow fashion students, and anyone doubting their dreams, Piehler says “Keep your head up. You may get discouraged, but you’ll get there.”