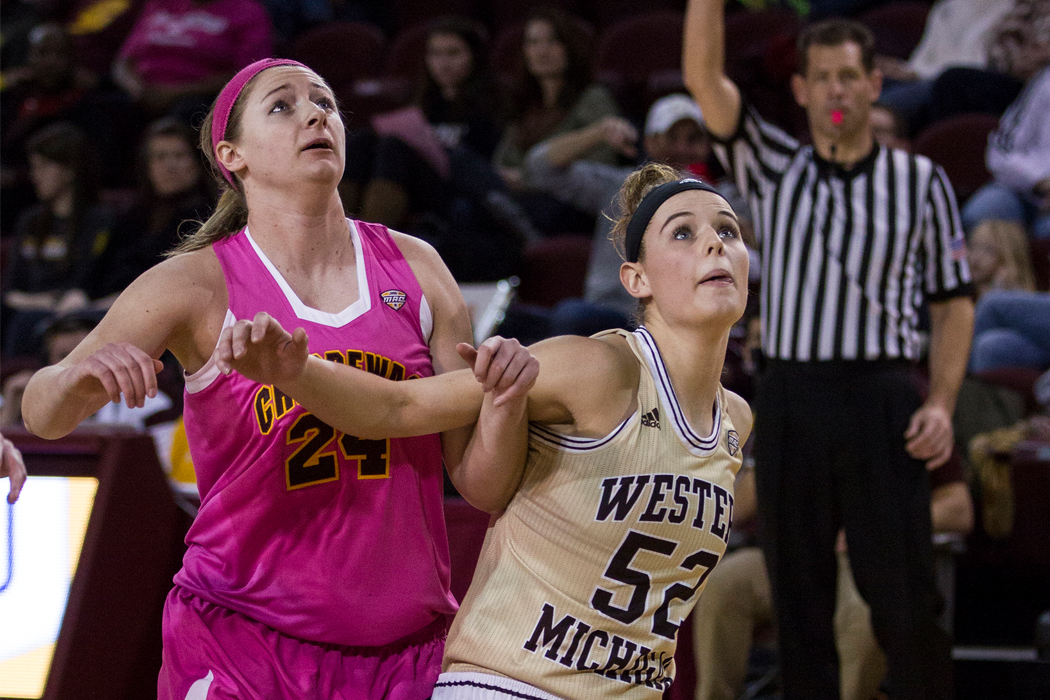 Despite the fact that Crystal Bradford was coming back from injury and still not fully healthy, the hope was that she would be ready to go by conference play. Enter fellow seniors and returning key contributors Jessica Green, Jas’Mine Bracey and Kerby Tamm, and there were plenty of reasons to believe that the Chippewas would be making their second trip to the NCAA Tournament in three years.

In sports though, things don’t always go as planned, and that couldn’t have been more true for head coach Sue Guevara and her team last season. Senior Jessica Green and then-sophomore forward Jewel Cotton both suffered season ending injuries in non-conference play. Crystal Bradford never fully returned to expected health and was completely shut down late in MAC play, and the team stumbled their way to a 7-11 MAC record, going 13-18 overall.

The injuries allowed others to shine though, the prime example being now-senior guard Da’Jourie Turner. With Bradford missing time throughout the year and not always being 100 percent, Turner emerged as the team’s primary scorer and earned All-MAC honorable mention.

Coach Guevara knows that she has a go-to player heading into 2015-16 with Turner on offense. Without the injuries to Bradford and Green, Turner likely won’t get the chance to shine like she did last season.

The team will also rely heavily on sophomore Cassandra Breen this season, who was streaky as a freshman but showed flashes of being a potentially lethal three-point shooter. Breen has a ways to go before she can match the career of Tamm, but she appears to be in the same mold, a lethal three-point shooter who can also contribute on the floor in a variety of other ways.

Aleah Swary, a fellow freshman sharpshooter with Breen last season, was also granted opportunity because of injury and took advantage, having a nice stretch late in the season where she grew noticeably more comfortable.

Along with Turner, Breen and Swary, the Chippewas also will depend on Cotton to be a contributor, as she was one of the biggest bright spots last season for the team before getting injured early. Cotton isn’t necessarily the type of player who you can run an offensive set through, but she’s strong on the glass and can put up a lot of points on putbacks and layups

Despite an up and down senior campaign replacing Bracey will be difficult, and the Chippewas to figure to rely mainly on two sophomores to try and accomplish that. The two players are polar opposites, as Tinara Moore is a defensive-minded center who’s capable of being a menace in the paint and very good shot blocker when she’s engaged, while Karli Herrington is more of an outside-oriented interior player who needs to improve inside and get stronger. However, Herrington is a good shooter and could prove extremely valuable with her ability to space the floor and free up the paint so a player like Turner, who can get to the basket pretty much whenever she wants, will have room to operate.

The Chippewas also welcome in UMass transfer Jasmine Harris, who was with the program last year but forced to sit out due to transfer rules. In 2013-14, Harris averaged 10.3 points per game, so the addition of a double-digit scorer with so many contributors from last year gone will certainly be welcome.

There are a lot of uncertainties heading into 2015-16 for the CMU women’s basketball team, but there is also a ton of potential as the program attempts to navigate through a post-Bradford world. This is a team that could go possibly go eight or nine deep, and despite the loss of Bradford and three other key seniors, should have a better record than they did a year ago.