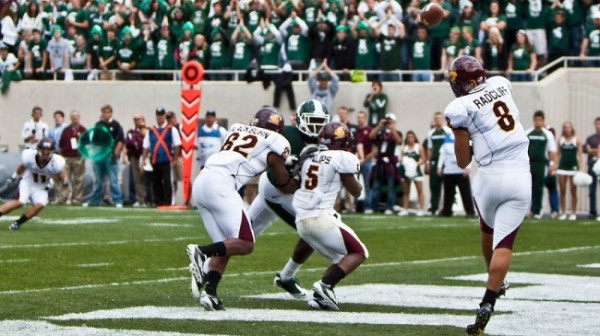 The second-quarter substitution of A.J. Westendorp for Ryan Radcliff  is only the beginning of the quarterback carousel in Mount Pleasant.

Neither quarterback resembled an adequate signal caller on Saturday and with freshman quarterback Alex Niznak redshirting this season, Radcliff and Westendorp represent the bottom of the proverbial barrel. Niznak is a talented young quarterback with loads of potential but the redshirt was warranted, as it was evident the freshman was raw and not yet prepared for this level of play during the spring.

Unfortunately for Central neither Radcliff nor Westendorp appeared to be prepared for the Michigan State defense.

Radcliff was struggling against what prior to Saturday’s game was considered a shaky Spartans secondary, only completing 5 of 10 passes for 31 yards and a costly interception before he was pulled. Westendorp entered the game and on his first drive,  after a heady pump fake, pulled the ball down and ran for 15 yards. The decent pick-up wasn’t a precursor for things to come however as Westendorp proceeded to throw two interceptions on two consecutive drives and Radcliff was inserted back into the lineup.

When a switch like this happens, the unavoidable question is asked: Who will start next week? Head coach Dan Enos’ answer, just led to more questions.

The point that needs to be made here is Westendorp didn’t play well and he didn’t play for the rest of the game. Instead of letting the young quarterback ride it out in a game that was virtually decided, Enos reinserted Radcliff, in a move made out of frustration.

The sophomore was nervous and became trigger happy, forcing things that didn’t need to be forced in an attempt to prove himself. The jitters were understandable because coming in for a starter who has just been pulled is nerve-racking enough but to do so against a Big Ten opponent in front of a large and unwelcoming crowd, is another animal.

Westendorp didn’t do anything to prove he’s better than Radcliff but Radcliff has had more than his fair share of opportunities to cement himself as the team’s unquestioned starter. Unfortunately he has never played consistently well enough to earn that distinction.

The junior has started 16 games at Central and has thrown two or more interceptions in eight of those starts. Three of those games have come this season and his inability to protect the ball influenced Enos’ decision to pull him against the Spartans. The whispers that have swirled around the program all season about the quarterback position will only grow louder in the coming weeks and well into next season.

Radcliff’s poor play coupled with a 1-3 record headed into MAC play this week, will only fuel the fire that Niznak’s arrival on campus started. Westendorp may or may not take over as starter this season for Radcliff,  his play Saturday won’t help his cause but Niznak could get a serious look next season, despite it being Radcliff’s senior year.

There is no telling where Niznak’s development will be by next fall or whether he’ll be ready to compete with Radcliff, but another losing season for Central could lead to a hotter seat for Enos. That potential reality would give Enos reason to hand over the reins to the redshirt freshman in 2012, whether it be from the word go or a few games into the season if Radcliff plays poorly.

Niznak’s commitment to Central was welcomed with plenty of local fanfare, after he led the Ithaca Yellowjackets to an unblemished record and a state championship during his senior season. His mobility would bring another dimension to Central’s offense and if his mechanics are slightly altered, he could be the dual threat the Chippewas have missed since Dan LeFevour’s departure. With that being said, Radcliff still has time to turn it around after it became evident that the gap between he and Westendorp could be slightly larger than once thought.

If I had to wager a guess as to who will start against Northern Illinois this week, it would be Radcliff but he’ll be on a very short leash. Radcliff while shaky, has looked better than Westendorp did on Saturday and that’s enough to give him the nod for now. How Enos will decide to handle this situation going forward remains to be seen, but if Radcliff continues to struggle don’t be surprised if that carousel starts moving again.