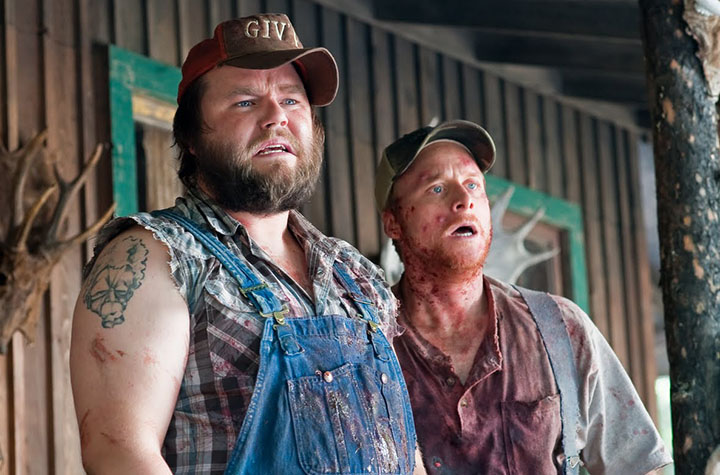 The last few weeks of The October Horror Project had movies that were (mostly) meant to frighten and disturb. Discussed were movies about mythical bloodsuckers, things that go beyond the realm of understanding, and the terror contained within the mind. All of these films are great, but this week is a bit of a deviation:  horror comedies are for the people who dislike being scared out of their wits, and they can be just as fun to watch on Halloween night.

It is unlikely that many people recognizesJames Gunn’s name, considering the director hasn’t had a big release since, well, “Slither.” More accurately, “Slither” was one of his only films to make it to the multiplex, and Gunn went absolutely wild with it. Affiliated with the low-budget pioneers at Troma, Gunn stuffs his story about killer alien slugs with gross-out gags and high suspense. It may make you throw up in between the bouts of laughter.

Jack Hill’s brilliant “Spider Baby” serves as an even more demented precursor to “The Texas Chainsaw Massacre” (1975). Starring an aging Lon Chaney, the film tells the story of a family that, due to a lineage of incest, has a disorder in which their mental state deteriorates as their physical state progresses. It also features Rob Zombie associate Sid Haig in a very early role. Unsurprisingly, it’s a fun one.

We all know Peter Jackson the reliable Hollywood auteur, but here is a side of a director that many are less familiar with. It is no small claim to say that the gore in this film outdoes just about anything else on the lists thus far. A lonely man is forced to look after his sickly mother, but things change when she is bitten by a monkey and transformed into a blood-lusting maniac. The finale of the film is a splatter fest gone wild, with limbs and blood and guts spraying left and right. A recommendation: Grab a couple beers for this and watch it with a group.

“From Beyond” is Stuart Gordon’s lesser-known counterpart to “Re-Animator” (1985). They are both H.P. Lovecraft adaptations that deal with science gone awry, but the former is even more grotesque. Scientists are working on a machine to stimulate the pineal gland and end up crafting a portal into another dimension. If you’re looking for a gross-out horror film, look no further. Gordon’s gleefully over-the-top direction deserves much more attention.

Here is a film that delivers on its exceedingly clever premise: two rednecks (Tucker and Dale) are convinced teenagers in the woods are trying to kill them, while the teenagers (who have seen one too many backwoods horror movies) are convinced the pleasant men are trying to do the same thing. As a sly riff on our prejudices and horror conventions, it doesn’t miss a single beat.

Notice that the 8’0s were a wonderful time for horror comedies. Dan O’Bannon’s raunchy “The Return of the Living Dead” may be the cream of the crop, and its reputation as a lowbrow masterpiece has endured. As an accident in a medical facility releases a gas that brings the dead to life, a motorcycle gang wanders through the graveyard where it is all taking place. According to the film’s Wikipedia page, it was the very first in history to have zombies eating brains instead of flesh. Where would we be now if “The Return of the Living Dead” had never been conceived? Think about it.

“Birdemic: Shock and Terror” is James Nguyen’s breathless homage to Hitchcock’s “The Birds,” and the director is equally adept at setting forth a vision of winged terror.

Okay, fine, this movie is terrible. But its ineptitude is part of what makes it essential. Plot? Who cares? Watch Nguyen’s film and simply marvel at the surreal and hilarious performances, shoddy sound editing and the misguidance of its writer/director. You won’t regret it.

Look for the last installment of The October Horror Project next week!